Dell could have been forgiven for attaching a monstrous price tag to the Alienware 34 QD-OLED gaming monitor it introduced at the Consumer Electronics Show (CES) last month. After all, it ticks a lot of desirable boxes, and rocks an OLED panel, which is still a rarity in the gaming display space. But instead of saddling it with an overly heavily price tag, Dell has opted for a $1,299 MSRP.
Granted, that's not cheap and we're keenly aware that $1,299 is well beyond the bound of budget pricing. But given the combination of an OLED screen, premium features for gamers, and the Alienware branding, we expected this thing to cost several hundred dollars more than the MSRP. Would you have been surprised if it bumped up against the $2,000 mark, or ran north of that mark? Us either. To put Dell's price into perspective, consider that LG's 32EP950-B UltraFine OLED monitor commands around $3,950 on Amazon (via Adorama).

It undoubtedly helps that OLED panel pricing is more reasonable these days, just we have not seen much of it in the monitor sector (OLED has been mostly concentrated on big screen TVs and mobile devices). There's also emerging competition from mini LED technology, with several related products (like ViewSonic's Elite XG32IUG) announced at CES as well.
Here are the key specs... 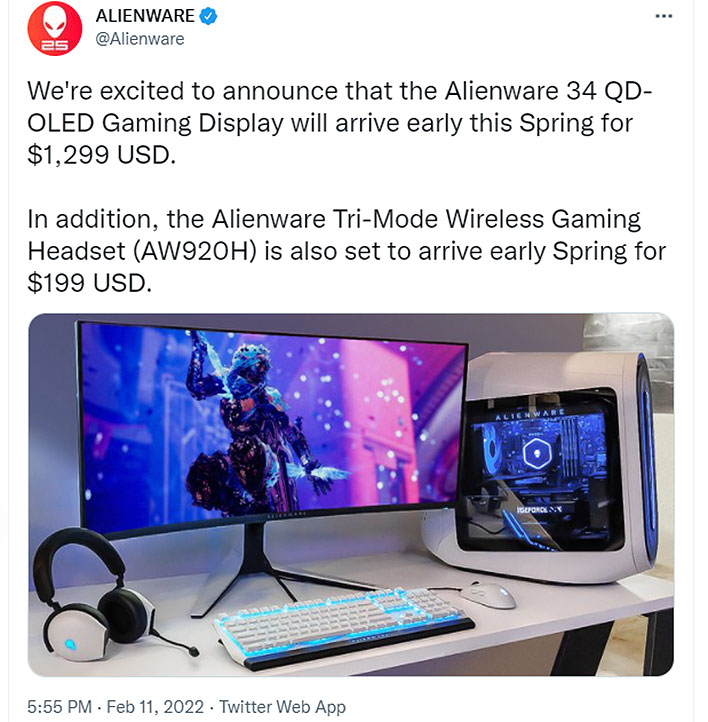 Summed up, it's a high-resolution display with a relatively fast refresh rate, HDR support, high peak brightness, and G-Sync Ultimate support. And being an OLED display, you get inkier blacks than what LED screen produces, and nary a response time to speak of.
We have not tested this monitor yet, so we can't speak to its actual real-world performance. On paper though, it has the makings to the be the crown jewel of your gaming setup, and at a price that is lower than most people probably anticipated. And it's possible that sales and coupon codes could knock it down below MSRP.
Look for the Alienware 34 QD-OLED gaming monitor to arrive "early this Spring."