We are fast approaching the end of an era. In just one more day, Microsoft will stop supporting Internet Explorer, ending a long run that began way back in 1995. When that happens, the desktop IE 11 app will cease to function as it has up to this point, and will instead redirect users to Microsoft Edge, the browser's Chromium-based replacement.
"As previously announced, the future of Internet Explorer on Windows is in Microsoft Edge. Internet Explorer mode (IE mode) provides legacy browser support within Microsoft Edge. Because of this, the Internet Explorer 11 (IE11) desktop application will be retired on June 15, 2022, for certain versions of Windows 10. This means that the IE11 desktop application will no longer be supported and afterward will redirect to Microsoft Edge if a user tries to access it," Microsoft stated in March.
For most home users, IE's retirement is a non-event. We looked up StatCounter's data on IE's current market share and it stands at just 0.64 percent, putting it in last place among all the major browsers. Chrome, meanwhile, dominates the scene with a 64.95 percent share of the market, and that figure doesn't include Chromium-based alternatives like Edge (3.99 percent) or Opera (2.11 percent).

Be that as it may, IE still plays an important role in certain sectors, and namely the enterprise segment. There are still plenty of businesses and organizations that rely on IE compatibility. 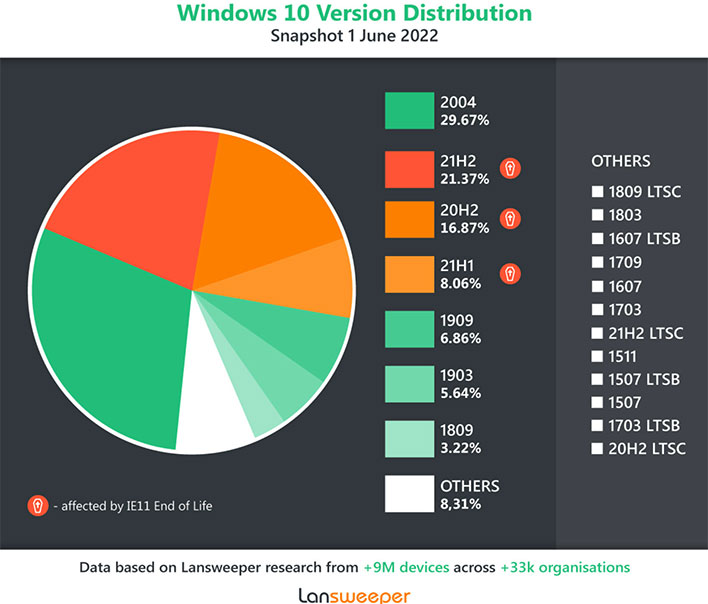 How many, exactly? That's hard to tell, though the folks at Lansweeper, an IT asset management company, audited over 9 million devices across 33,000 organizations. In doing so, the company found that  over 46 percent of Windows 10 devices will potentially be affected by IE 11's pending end-of-life on June 15, 2022.
The data is a bit murky because it only looks at the distribution of Windows 10 versions, and not whether organizations are actually using IE or another browser. To that end, though, only around two out of every 10 PCs were found to be running the latest version of Windows 10.
One thing to note is that while IE is retiring, it's not disappearing wholesale. After tomorrow, it will still be accessible in Windows 7 ESU, Windows 8.1, Windows Server SAC (all versions), Windows 10 IoT LTSC, Windows Server LTSC, Windows 10 client LTSC, and Windows 10 China Government Edition.
In addition, the Edge browser includes an IE compatibility mode. You can find it by navigating to Settings > Default browser, and then select "Allow" from the pull-down menu next to "Allow sites to be reloaded in Internet Explorer mode." Or just leave it alone and Edge will give you the option to do so when running into an incompatible site.