We're not sure who needs to hear this at Amazon, be it Jeff Bezos or a warehouse manager, or someone in the shipping logistics group, but for the love of everything that is holy, can you PLEASE stop skimping on shipping materials when sending out AMD Ryzen 5000 series processors that cost several hundred dollars? Pretty please, with a Raspberry Pi on top?
Look, we get it—over packaging items is both wasteful and an annoyance. You know, like when ordering a stick of lip balm and it gets shipped out in a box that would have been big enough to hold 100 sticks of lip balm, and could have just as easily been sent in a soft-pack mailer -- like the ones you folks for some reason are also using to pack AMD's Ryzen 5000 series CPUs that are in short supply.

Hey Jeff or whoever you are at Amazon that is totally taking this to heart, see the picture up top? That is how an AMD Ryzen 9 5950X arrived from one of your warehouses, according to Reddit user Healthy_Talk_8346. Real talk—that is not adequate packaging for an $800 CPU. Forget for a moment that some people like to hold onto and even showcase their retail packaging. That almost rectangular cutout is actually supposed to be squarish, because it is where this $800 chip resides before the user decides to install it. Oh, but it gets worse.
"FIY—the box was wet too... But the envelope wasn't. Totally happened at the Amazon distro place...," the user said, adding that "there is condensation build-up in the CPU sleeve from the box."

Are you kidding me? Is there a moat in the warehouse that this thing accidentally fell into? But at least the pins are not bent, as was the case for a different buyer who purchased a Ryzen 5 5600X earlier this week and received it in a soft pack mailer as well. This is how that one arrived... 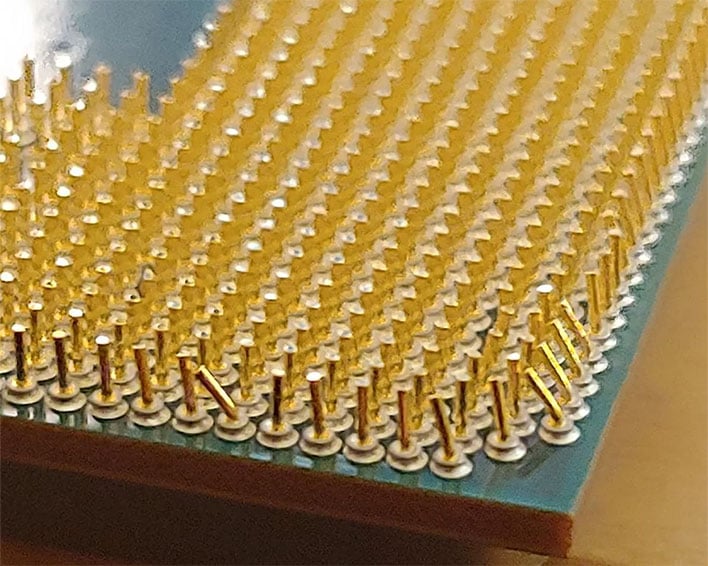 "There are so many bent pins around all four edges of the CPU and I don't have the first clue as to how to fix them. I've tried tweezers and razor blades and using my phone camera as a magnifier, but haven't been successful on a single pin. They are too small for me to work on. AARRGGHGHGGH!!!!," the unlucky buyer wrote.
Jeff, my man, are you seeing the problem here? That's a lot of bent pins, and according to the buyer, they are on all four sides of the CPU. Sure, it is probably fixable, but that is predicated on being able to successfully bend probably dozens of pins back into their proper orientation without breaking one of them. It's either that, or send the CPU back and wait weeks or maybe even months for another shot at ordering one of these highly elusive CPUs. Not cool.

We wish these were isolated incidents, but along with the rest of the team here at HotHardware, we find ourselves reporting on this kind of thing with alarming frequency nowadays - as in three times in the past week. Remember this one? 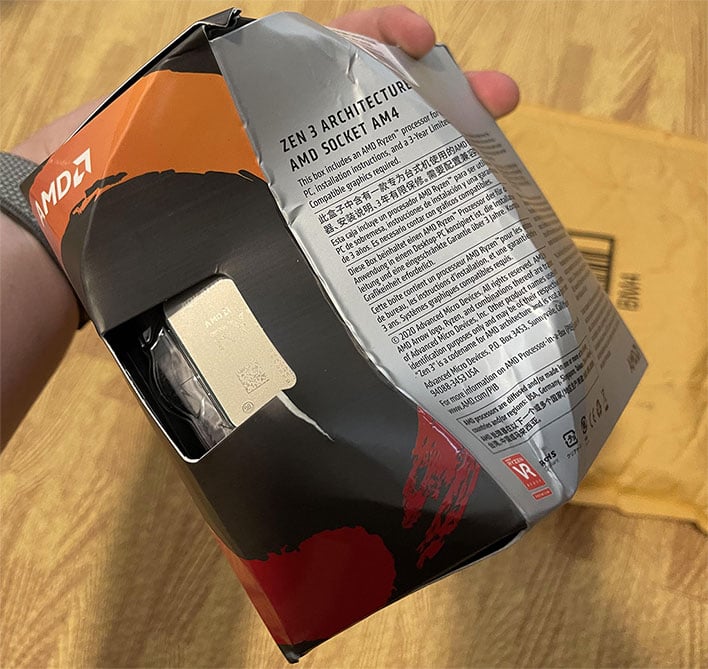 That is a mangled Ryzen 9 5900X retail box, shipped from you folks in a cardboard box with ample packaging material inside. Just kidding, it was sent out in a soft pack mailer too. The $550 CPU inside survived the ordeal, though the buyer claims it was about to fall out of the packaging by the time it arrived. Yikes.

And hey, we understand that AMD bears some responsibility here as well. AMD should be using sturdier packaging (and we assume this is how Intel CPUs are sent out as well, but haven't noticed the same complaints as of late). But if you're seeing what we're seeing, we're not sure it would matter what the hell AMD used, short of a titanium suitcase.
Getting back to the $800 Ryzen 9 5950X (that's as scarce as hen's teeth right now at MSRP) that spurred this open letter, kudos for at least working with the person who bought the chip.
"I just ordered my motherboard so I can test it, so we'll see if it works. Letting it dry out until Sunday when the motherboard comes in. After I explained the rarity [of the] situation to them, and explained what it would take to confirm functionality, Amazon did give me a 'one-time exception' of a 30 percent discount ($252) to pay for a motherboard to test the CPU, so I can't complain about their customer service at least," the user wrote.
That's an awesome gesture, truly. But do you know what would be even more awesome? If you would STOP SENDING CPUS IN SOFT PACK MAILERS! You raked in $96.15 billion through the first three quarters of 2020 (Q4 results have not yet been posted) for a profit of $6.33 billion, up almost 200 percent over the same quarter in 2019.
Congrats, that's a lot of scratch. How about using a portion of it on better packaging for Ryzen 5000 series CPUs? Unless my neighbor orders one, he recently borrowed my favorite flashlight and then lost it, the jerk.