Could This Be The OnePlus 8 Lite Phone On Deck For A 2020 Launch?

There might not be all that many surprises from OnePlus in 2020, at least in regards to its OnePlus 8 series of smartphones. We have already seen leaked renders of the OnePlus 8 and OnePlus 8 Pro over the past few months. Now we can add a OnePlus 8 Lite model to the mix, with a fresh set of renders showing off the device.
In case you missed any of the past leaks, the OnePlus 8 will supposedly launch with a curved-edge display sporting a punch-hole design, and three cameras on the rear on the device. The OnePlus 8 Pro, meanwhile, sports a similar design with the same curved-edge display and punch-hole design for the front camera, but with a quad-camera arrangement on the back.
Both of those are going to be high-end handsets that occupy the flagship space. The OnePlus 8 Lite, however, is poised to be a mid-range phone with a design that is more in line with Samsung's Galaxy S11, Note 10 Lite, and Galaxy A91. 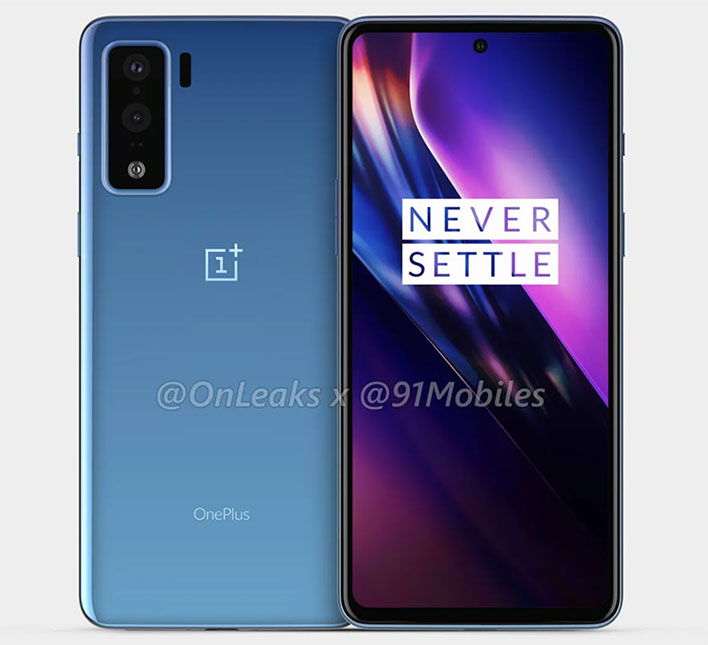 As has been a recurring collaboration, notorious leaker @OnLeaks joined forces with 91mobiles to post a handful of renders showcasing the OnePlus 8 Lite. Unlike the other two phones in the OnePlus 8 series, the OnePlus 8 Lite touts a flat-display design, which is estimated to be between 6.4 and 6.5 inches. It also sports a punch-hole cutout for the front camera, positioned in the center at the top of the handset.
We can also make out some other details, such as a Type-C port on the bottom and an alert slider on the side. Missing, however, is a 3.5mm headphone jack.
On the back, there is a curved glass panel with a reflective finish. We also see a rectangular housing of the rear cameras—there appear to be two camera lenses, along with an LED flash and some other sensors (possibly a Time of Flight sensor being among them).
OnLeaks says the phone measures around 159.2 x 74 8.6mm. Beyond that, there are no other concrete details, such as which processor will be inside, what the specs of the cameras are, and whether or not it will feature a 90Hz refresh rate display like the other two OnePlus 8 models.
Images Source: 91mobiles (via OnLeaks)