It's no secret that Intel's Core i9-12900K beats AMD's Ryzen 9 5950X in most benchmarks, even multi-threaded ones, despite having two fewer cores. We demonstrated that ourselves in our review of the CPU. The Ryzen 9 5950X generally puts up a good fight, though.


Well, thanks to its extra gear in clock rate, the Core i9-12900KS widens the gap even further. We haven't gotten our hands on one to test yet, but Reddit user /u/Seby9123 apparently did somehow, and put it through its paces in CPU-Z and in Cinebench R23.

Seby9123 confirmed that, as Intel claimed, the CPU does in fact hit 5.2 GHz on all P-cores while doing 5.5 GHz on two. Surprisingly, the Core i9-12900KS runs the same uncore or "ring" frequency as the Core i9-12900K, 3.6 GHz. Overclockers have found that raising this frequency, which is normally linked to the E-core clock, can give big performance gains.
Seby9123 is one such experienced overclocker, and they also posted a Cinebench R23 multi-core result with the E-cores disabled, all P-cores running at 5.3 GHz, and the Ring clock at 4.8 GHz. The score, 20510, is much lower than the same CPU scores with the extra eight E-cores enabled, but it is absolutely absurd for an eight-core processor. In fact, in our Cinebench R23 tests, the twelve-core Ryzen 9 5900X is only barely ahead at 20717. 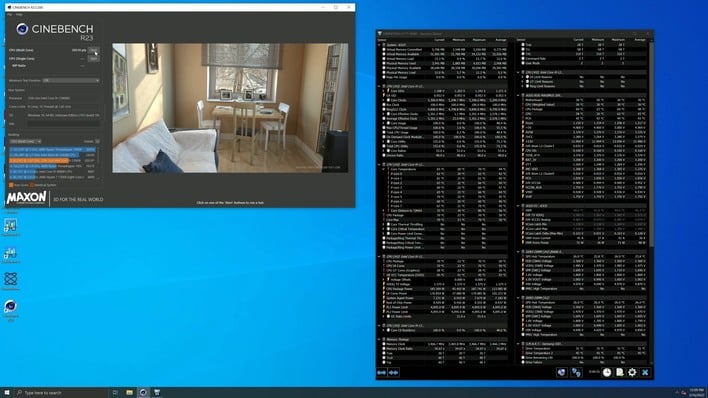 Cinebench is a single benchmark, and while not completely synthetic—it tests performance for Maxon's Cinema4D renderer—it nevertheless is not particularly representative of performance in other mainstream tasks and even other content creation workloads. With that said, considering this high score is coming from a CPU with ludicrous single-threaded performance, we would expect Seby9123's Core i9 12900KS to pretty much flatten all comers in gaming benchmarks as well.


We'll have to see how this thing ticks when it hits the market April 20th.