The developer responsible for the popular DRAM Calculator for Ryzen utility is getting ready to release another software package for AMD's processors, this one called ClockTuner for Ryzen (CTR). Set to go live tomorrow, September 29 at noon ET, the nifty follow-up utility will enable finer grain control over certain Ryzen CPUs, for potentially higher overclocks and better performance.
Part of the appeal of the upcoming CTR utility is that it auto-tunes performance and power configurations in Windows environments (you need .NET installed). This means less experienced users will potentially be able to benefit, without having to get their hands too dirty fiddling with settings they may not fully comprehend.
It comes by way of Yuri Bubliy (@1usmus), who announced on Twitter that it will release tomorrow. The utility will be accompanied by user manuals in three languages, including English, German, and Russian, depending on where you download it from (Guru3D.com, Computerbaselde, and Overclockers.ua, respectively).
CTR will support most of AMD's latest generation Zen 2 processors right out of the gate, though there are a few exceptions, such as the beastly 64-core/128-thread Ryzen Threadripper 3990X and a handful of APUs. Here's a compatibility chart Bubliy put together... 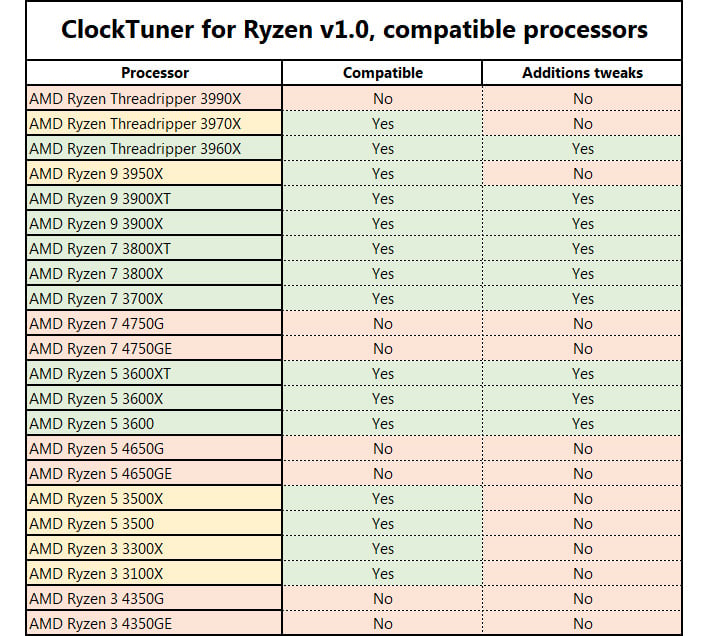 The utility works its magic at the Core Complex (CCX) level, and is capable of undervolting each of the clusters individually, and without disabling any of AMD's energy saving technologies. In addition, it configures overclocked settings depending on how the clusters respond, using a step-by-step algorithm to adjust the frequencies of each CCX.
Previously, Guru3D offered up some performance claims based on its testing of a pre-release build. Using the CTR utility, the site was able to achieve a 7 percent performance gain from a 12-core/24-thread Ryzen 9 3900X, with a 9.5 percent reduction in power consumption. And from a 24-core/48-thread Ryzen Threadripper 3960X, the site saw a 5 percent performance jump and 4.5 percent power consumption reduction, from using the utility. Not too shabby.