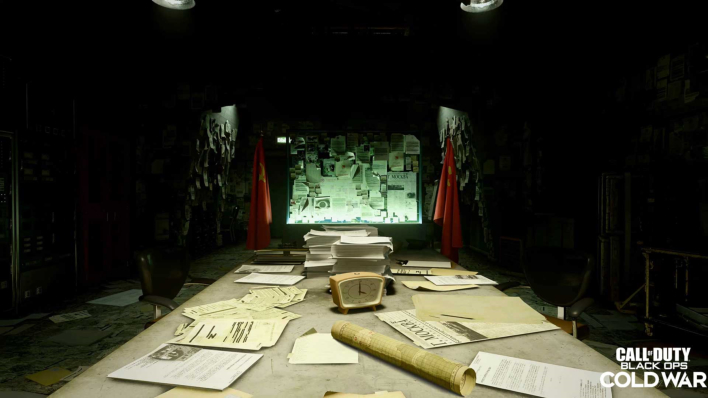 In early October, we got a glimpse at the action-packed multiplayer gameplay in Call of Duty: Black Ops Cold War. As we creep closer to the launch date of November 13th, we are getting more information about the latest Call of Duty installment. James Mattone, lead writer for Activision Editorial, and Raven’s senior creative director Dan Vondrak go over three missions from the campaign in a blog post about the blockbuster first-person shooter.

We’ve known that gamers will travel the world in the next Call of Duty game but seeing where they will go is quite interesting. The first location we get to see is from campaign mission “Nowhere Left to Run.” This mission will be based in Amsterdam, two weeks after New Year’s Day in 1981. Mattone writes that “A massive break in a CIA investigation led three operators to this otherwise seedy watering hole,” and “After a meeting with their source, the checks are cleared and they exit past the local bargoers to the alleyways, gearing up to capture the first of two key players to an ongoing hostage crisis.” This mission “is a great example of how we wanted to pay homage to the original Black Ops in a few ways that fans will recognize,” says Vondrak. He also claims that this mission is a great way to be introduced to the Black Ops series, as you need no prior experience with the franchise. Players will be introduced to Woods, Mason, and a new hero named Russell Adler.


The next mission we get to see is “Fracture Jaw,” a flashback of the main characters’ time from the Vietnam war. This is where the player first encounters Perseus, “a mysterious Soviet spy that some people believe never even existed.” The flashback will allow the player to get clues to tracking down Perseus, even through the struggle of deception. Vondrak says that “Narratively, these two pieces fit together perfectly as the team has to try and relive their past and unblur the lines between truth and deception.” This sort of mission wants to add context to the whole campaign, making the story another layer deep.


The third and final mission we get a sneak peek of is “Desperate Measures,” where players must infiltrate the KGB headquarters in Russia. Vondrak claims that “Desperate times call for desperate measures, and that’s what this mission is all about.” Players will get to use covert spycraft, “assum[ing] the role of a Soviet double agent working for the CIA reporting for work at the KGB’s headquarters.” This will give players freedom and control over how they complete their mission, which is a nice change in pace and tone for a Black Ops mission.


Through these peeks into campaign missions, Call of Duty: Black Ops Cold War is shaping up to be an exciting game. What makes it even more exciting is the use of real-world history; as Vondrak says that “This was a critical element that made all the conspiracy so great in the original Black Ops and is something we couldn’t wait to continue.” The game will release on November 13th with a mix of “Cold War history with a thrilling, fictional experience that only Black Ops can deliver.” As Vondrak and his team explain, “Know your history or be doomed to repeat it.”