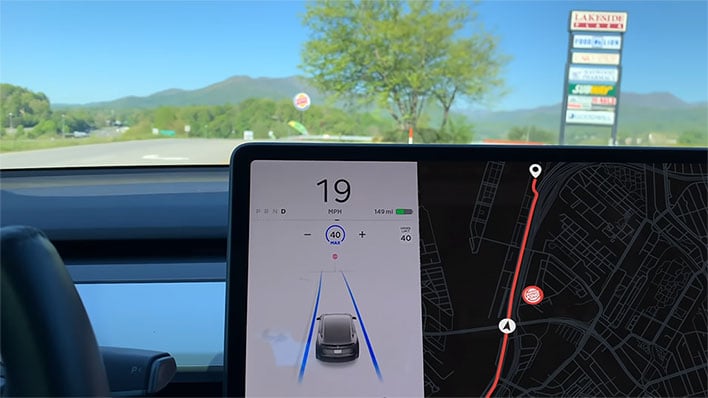 Sometimes I get a hankering for a juicy burger, and if I happen to pass by a Burger King, a Whopper (with extra pickles, don't @me) will suffice. It looks like I'm not the only one. Apparently the Autopilot feature in Tesla vehicles can confuse circular Burger King restaurant signs with stop signs, and will slow down accordingly.
This is part of a new "Traffic Light and Stop Sign Control" feature that Tesla is beta testing, though to be clear, it's not supposed to slow down for restaurant signs, Burger King or otherwise. Burger King ran with the idea anyway, and for a brief period, was offering a free Whopper to Tesla owners who shared a picture of their smart car stopped at one of its locations.
The buggy behavior gave way to some clever marketing, with Burger King proclaiming, "Smart cars are smart enough to brake for a Whopper" and "Artificial intelligence knows what you crave." Well played, Burger King.

This was only a day-long campaign, perhaps to avoid going broke giving away burgers—smart car owners only needed to share a pic of their car parked in a Burger King parking lot, and not necessarily by way of a malfunctioning Autopilot mode.

So my car knows what’s up and stopped at @BurgerKing for lunch #freewhopper #AutopilotWhopper pic.twitter.com/sgIBaNL8sf

This is an excellent example of how to leverage social media (it's certainly better than Burger King's Google Home hack a few years ago). In fact, the tweet that brought the above to attention has racked up over 1 million views, as well as opened up an opportunity for the fast food chain to interact with the public in an amusing way.
Lost in the shuffle, however, is a way out of a potential Skynet scenario. Sometimes it seems inevitable that robot overlords will eventually bend humans to their will, but now we know they have a weakness for Whoppers. Game on.