Seeing Grand Theft Auto VI or Red Dead Redemption 3 in the future is a pretty safe bet considering those are Rockstar’s biggest IPs. The fan-favorite game from Rockstar, Bully, may not get the same treatment, however. Leakers have reported that Bully 2 got the axe back in 2017 due to its more popular franchises taking development priority. Does that mean it cannot be revived, though?


In late December, Rockstar insider Tez2 went to the GTA forums to explain a little bit of what happened at Rockstar since 2014. He claims that GTA VI was in “pre-production back in 2015, so development probably didn't kick off until 2016 or 2017, but shortly after that, the pace slowed down due to RDR2 increased focus and Bully 2.” Then, Bully 2 was cancelled in 2017, likely to focus on GTA and Red Dead Redemption 2. Another insider, Yan2295, corroborated this information in a Reddit post on /r/GamingLeaksAndRumours. 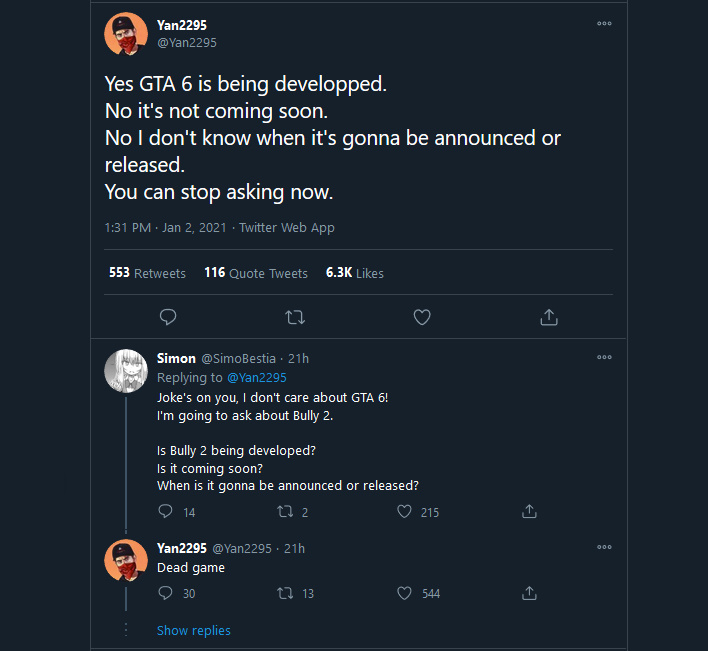 Now that Red Dead Redemption 2 is out, it seems the major hold up for Bully 2 is GTA VI, which may have its own production issues. Yan2295 took to Twitter recently, reporting that GTA VI is in development, but it will not be coming anytime soon. This contradicts other reports about GTA VI, so it seems no one knows what is happening, including Yan. When asked about Bully 2, however, Yan said that it was a dead game.

While Bully 2 could be a dead game, for now, the Red Dead Redemption team could be working on other projects besides GTA VI. Alternatively, Rockstar could revive the game in the future, but it will not likely be in the next couple of years. Ultimately, we will probably see GTA VI come before Bully 2, but weirder things have happened, and nothing would surprise us at this point.