The name Team Xecuter might bring back nostalgic waves for console pirates from the early 2000s, but for Sony, Microsoft, and Nintendo, the name likely brought shivers down executives' spines. In the early 2000s, the notorious pirate hackers created several iterations of modification chips for Microsoft's Xbox console. Those chips could override the system's built-in, locked-down BIOS to run pirated games. More recently, the group is known for the SX lineup dongles that could perform similar actions on various Nintendo Switch models. Now, their hacking days may be over.

The U.S. Department of Justice has arrested accused Canadian ringleader Gary Bowser and two of his alleged co-conspirators, Max Louarn of France and Yuanning Chen of China. The Justice Department says Louarn and Bowser were arrested abroad. Bowser was caught in the Dominican Republic and extradicted to the United States in September. Louarn remains abroad and extradition is in progress. The Justice Department did not disclose Chen's current location.

Indictments against the three accused accused pirates were unsealed by the Justice Department on Friday. Each faces 11 various charges each, including wire fraud, trafficking circumvention devices, and conspiracy to commit money laundering. In addition to the SX and its Xbox modchips, Team Xecuter is responsible for a host of other mods, including the Gateway and Stargate Nintendo 3DS flash cartridges, Classic2Magic cartridge adapter for the Nintendo SNES Classic, and the TrueBlue Mini for the Sony PlayStation Classic and Sega Genesis Mini.

In a statement, Acting Assistant Attorney General Brian C. Rabbitt of the Justice Department’s Criminal Division said, "These arrests show that the department will hold accountable hackers who seek to commandeer and exploit the intellectual property of American companies for financial gain, no matter where they may be located."  The FBI's Seattle Field Office Special Agent in Charge Raymond Duda says the arrests are "a perfect example of why the FBI has made the prevention of the theft of intellectual property a priority. These arrests should send a message to would-be pirates that the FBI does not consider these crimes to be a game." 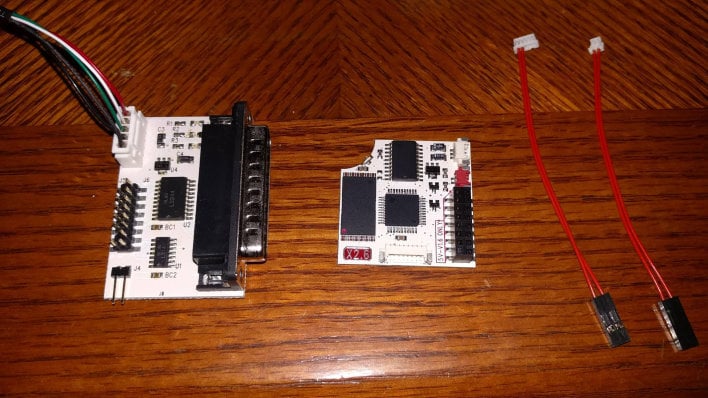 According to the indictment, Team Xecuter hid the accused illegal nature of its business behind a facade of helping to support gaming enthusiasts who wanted only to create their own homebrew games for non-commercial use. The Justice Department says the overwhelming demand for the group's products was solely for playing pirated copies of commercial games. Particularly egregious in the eyes of the Justice Department, however, was the need to purchase a license for the SX's operating system, which it says betrays the true nature of the device.

Interestingly, the arrests only cover activities and devices ranging back to June of 2013. Older devices like the Xbox modchips for which Team Xecuter is known are not mentioned. The original Xbox was one of the first platforms where homebrew became a big deal, as documented by YouTuber Modern Vintage Gamer, who himself burst onto that scene by porting game engines like Doom and Quake to Microsoft's original console.

Seeing as these arrests were just announced, this case is just getting started. As fact finding continues and the case unfolds, we'll keep you up to date with the latest.