A new challenger to the Tesla Model 3 is entering the ring, and it's coming from a familiar name in the compact luxury sedan market. BMW just revealed U.S. pricing and specifications for the electrified version of its 4-Series. Of course, given that it's a BMW, the vehicle won't come cheap, and its starting price is well above what you'd find with the Model 3.

Starting things off is the i4 eDrive40, which features a single rear-mounted electric motor good for 335 horsepower. BMW says that this configuration can send the vehicle from 0 to 60 mph in 5.7 seconds, while the EPA driving range is said to be up to 300 miles with its 81.5 kWh battery pack.

Sitting at the top of the range is the i4 M50, which sports rear- and front-mounted electric motors pumping out a total of 535 horsepower and 586 lb-ft of torque. This output is good enough to accelerate the i4 M50 from a standstill to 60 mph in 3.9 seconds. Unfortunately, the increased power comes at the expense of range, as the same 81.5 kWh battery is only suitable for 240 miles on the i4 M50.

Both versions of the i4 use a 400-volt battery system and support 200 kW charging. By BMW's estimates, you can go from a 10 percent charge to 80 percent in about a half-hour. 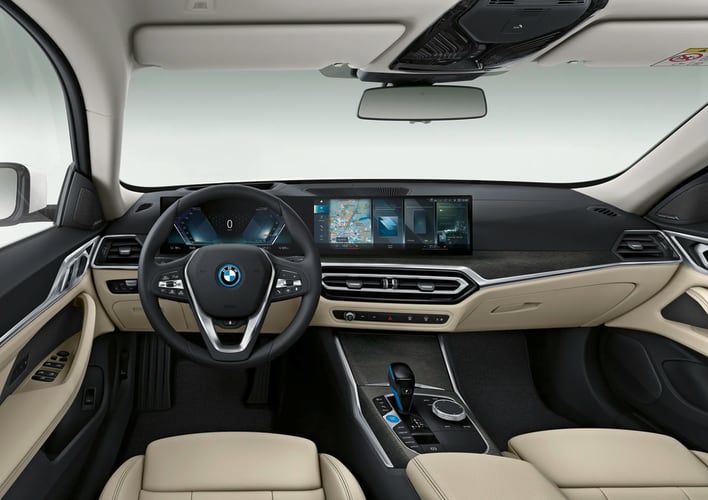 While the i4 might not fare favorably to the Model 3 on performance and range, we're sure that it will top the Tesla regarding build quality. Teslas are notorious for poor-fitting body panels, shoddy workmanship, poor paint quality, and removing features without notice. And whereas Tesla seems reticent to giving the Model 3 a display screen in front of the driver (as it still does on the Model S and Model X), the BMW gives you a 12.3-inch driver's display and a 14.9-inch infotainment display.

Another thing that could play in the i4's favor is price. Both the i4 eDrive40 and M50 are still eligible for the $7,500 federal tax credit, which spending on your tax situation could increase its value play. Teslas are no longer eligible for additional federal tax incentives, although that could change in the future.

The BMW i4 family will go on sale in the United States next year.