Game Science, the developer behind Black Myth: Wukong, announced it is enhancing the visual fidelity of the upcoming game by upgrading from Unreal Engine 4 to Unreal Engine 5, and a trailer showing off some of the new visuals looks absolutely spectacular. It also happens to be the first look at an Unreal Engine 5 game enhanced with NVIDIA's Deep Learning Super Sampling technology.
There's no mention of the settings or other finer grain details, but at its core, DLSS is a fancy-pants upscaling algorithm that taps into the wonders of artificial intelligence (AI). NVIDIA really hit its stride with the latest implementation—see our are DLSS 2.0 quality and performance evaluation for more thoughts on the tech.
The new trailer for Black Myth: Wukong is 12 minutes long and shows quite of bit of actual gameplay, in addition to cinematic cut scenes. It was captured on unspecified GeForce RTX hardware (likely a GeForce RTX 30 series card). Grab yourself a beverage and a snack, kick back for a spell, and check out the trailer right here...

"Black Myth: Wukong is one of our most anticipated games, and our game developer support organization is working diligently with Game Science throughout its development to ensure GeForce RTX users receive the definitive experience," NVIDIA says.
The trailer showcases scenes captured in real-time. It's also noted that it is a work in progress and does not represent the final look of the game, which is understandable—Game Science had previously said it is aiming for a release sometime in 2023, while an FAQ on the game's landing page states it will only come out "when we feel satisfied as players, but we also need to take edge effects and cost performance index into consideration, as we are dreaming of a Black Myth series." 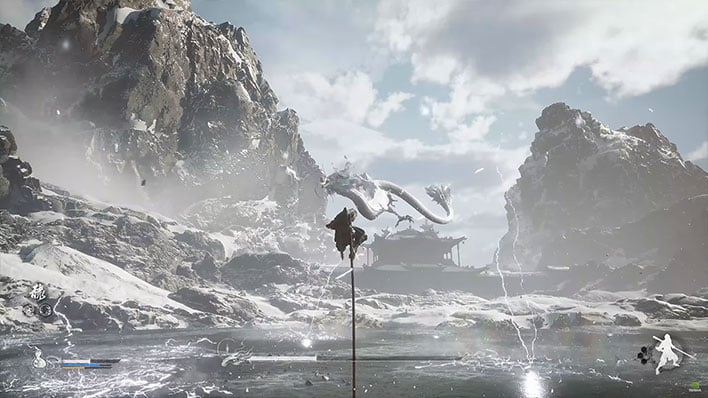 From what we can tell, things are progressing quite nicely. In the trailer, which is viewable at up to 4K at 60 frames per second, we get to see some beautifully rendered boss fights. Everything looks fantastic, from the puffs of snow to the glistening frozen lake. Then there are things like lighting and reflections, all of which add up to a gorgeous demonstration of an unfinished product.
On the gameplay side, Black Myth: Wukong is an action RPG that brings up inevitable comparisons to Dark Souls and Sekiro, in terms of the overall style. It's very much a different game with its own canon, though, with the player stepping into the role of Sun Wukong, also known as the Monkey King. It's based on Journey to the West, a novel published during the Ming dynasty.
There's still no exact release date, though the game will land on PC with DLSS support and current-generation game consoles.