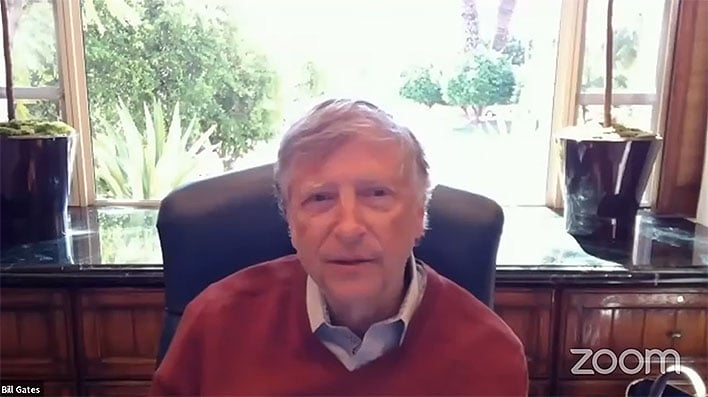 It seems everyone is turning to Zoom these days, whether it because they are working from home and video conferencing with colleagues, or chatting with friends while practicing social distancing. Microsoft co-founder Bill Gates and Dallas Mavericks owner turned Shark Tank star Mark Cuban hopped on for another reason—to share their insights with students.
They were part of two different "Code Break" sessions, which is the title of Code.org's live interactive classroom. It is the world's largest of its kind, and is hosted by the organization's co-founder Hadi Partovi and his daughter Sofia. These sessions are neat ways to keep students engaged while stuck at home during the Coronavirus pandemic, with special guests joining the sessions to keep them fresh and interesting.
Gates was the more recent participant, having joined the the fifth episode that streamed a few days ago. You can check the stream in its entirety below...

The entire sessions is a little over an hour long. If you are only interested in the part where Bill Gates joins the stream, skip ahead to the 20min40sec mark. During his time on the broadcast, Gates fields a variety of questions, including whether he thinks schools will open back up in the fall, and how medicines and vaccines are different today because of computer models versus before the days of technology in medicine.
To the former point, Gates is optimistic that schools will open, but suggests they will need to keep an eye on the situation and considering closing again for a month if a school happens to be in a pocket for COVID-19 flares back up.

“We’ll get through this first peak in the US and many other countries and we’ll want to open up somewhat. By the fall we should have better treatments so it’s not as risky as it is now," Gate said.
To the latter point, Gates said if COVID-19 had happened even just a decade ago "there's a lot of things that would be worse," such as the ability to perform medical work and being able to stay in touch—he points out there was not the bandwidth or capability to do Zoom calls with thousands of students during earlier times.
It's an interesting chat and definitely worth checking out.
Mark Cuban joined an earlier episode a few weeks ago, and that stream is available to view as well. You can check it out below...

It's another episode that spans over an hour long, with the Shark Tank star joining via Zoom at around the 33min09 mark, for anyone who wants to skip ahead. Prior to that, actress and iOS developer Lyndsey Scott was on the feed.
Cuban answered questions as well, and offered up some advice. When asked if he had any words of encouragement for the 90 percent of students who now find themselves studying at home alone, Cuban offered some perspective that is reminiscent of the movie Groundhog Day with Bill Murray.
"This is the chance you have if there's something you really like to do, try to be great at it. You know, I started going back on the piano, which I haven't been in years, just picking up some of my favorite songs and annoying my kids and wife. But read, picking up books that I wanted to get to. Whatever it may be, however you learn, what a great time to learn," Cuban said.
That is sort of the premise of Groundhog Day, where Murray finds himself stuck in a daily time loop. He eventually uses his daily do-overs to learn piano and better himself. Cuban's advice basically boils down to taking lemons and making lemonade, if you will.
He also talked about his history of coding and how it lead to him being a successful entrepreneur, among other topics.
It's nice to see celebrities and prominent personality take time to chat with students in these kinds of broadcasts. There will be more special guests in future episodes, with Code Break being a weekly thing every Wednesday at 10:00 am PT (1:00 pm ET). You can hit up Code Break's website for more information.