Tom Brady did his thing yesterday, dispatching with the New Orleans Saints to advance the Tampa Bay Buccaneers to the NFC Championship game. The winner between the Bucs and Green Bay Packers will advance to the Super Bowl. There are some enticing potential matchups for the big contest, and what better excuse is there to buy a big screen TV? Well, if you need another excuse, how about this—you can grab a 65-inch 4K smart TV for less than $500.
That was unheard of not that long ago, but pricing on big screen TVs have fallen off a cliff in recent years. What you see above is an RCA 65-inch TV (RTRQ6522-US) with QLED nanocrystal technology. It normally sells for $699.99, but is on sale at Walmart for $449.98 right now (save $250.01).
Obviously at this price you are not going to get cutting edge features like HDMI 2.1 inputs, and OLED pricing has not quite fallen to this level for a 65-inch panel. But you do get an overall good TV set with a 4K resolution, HDR support, and a built-in Roku player to stream content from Netflix, Hulu, Prime Video, and other streaming services.
It's a solid deal, though if you are not necessarily looking for the deepest discount and instead are interested in paying the least amount possible, we have you covered there as well... 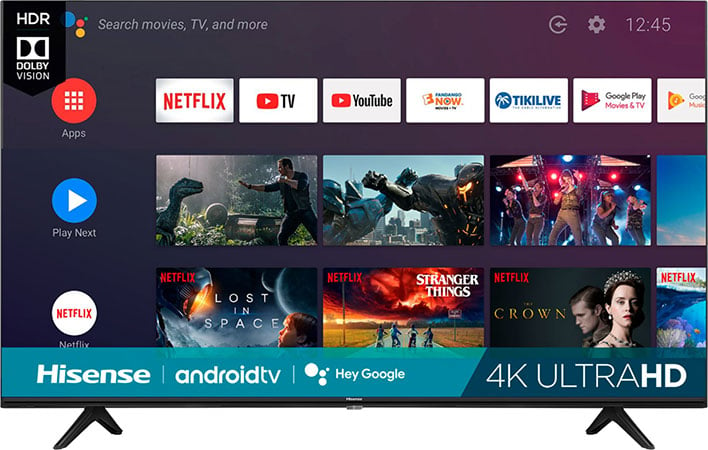 You can snag a Hisense 65-inch (H6510G) 4K smart Android TV for $399.99 at Best Buy (save $100). The discount is not quite as significant, but this is the least expensive 65-inch 4K smart TV we could find. It also has been received favorably by the majority of those who have purchased it, based on the user reviews—it has a 4.4/5 star rating out of 676 user votes.
Here again you are getting an 65-inch LCD TV with a 4K resolution, HDR support (Dolby Vision, HDR10, HLG), and smart features. The latter comes by way of being an Android TV with Chromecast built into it. It also works with Google Assistant and Amazon Alexa.
There are a few other 65-inch TVs that are under $500 right now as well. Here's a look...
Before anyone shouts at us, we realize that $379.98 (Sceptre) is less than $399.99 (Hisense). However, our comment about the Hisense model being the least expensive 65-inch 4K smart TV we could find is accurate, because the Sceptre TV lacks any built-in smart features. If you don't care about that, it is the least expensive 65-inch 4K TV overall.
In any event, you have plenty of relatively low cost options to plop a 65-inch TV into your living, bedroom, or wherever. Happy viewing!