In the past, the Battlefield series from EA and DICE has been incredibly well-received and well-played, but when Battlefield 2042 launched, things seemed to change. Between quality issues and bugs galore, players who picked up Battlefield just as soon put it back down again, and moved on to other games that have come out in the meantime. Now, sleuthing players believe that Battlefield is trying to pad its player numbers with unlabeled AI potentially in an effort to get people to come back to the fight.

The other day on the Battlefield 2042 subreddit, user Janus67 reported that he had played Battlefield with a buddy for about an hour, which is already not a good sign for the AAA title. In any event, Janus67 claimed that he and his friend “repeatedly saw ‘players’ with lowercase names and 3 numbers that were behaving just like the bots, and in camo/uniforms/models that did not look familiar.” These “players” would purportedly move in odd ways, stop, crouch, stand and crouch again, all “like you see bots do in solo.” 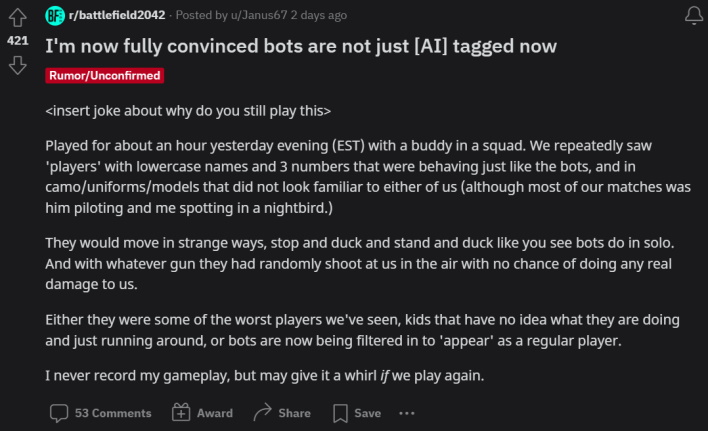 While these could just be terrible players, the report’s similarity to the bots in the game is interesting, to say the least. However, DICE may be using the empty lobbies to train better bots for players to fight against, and they are at the early stages of learning. It is also possible, as Janus67 suggests, that DICE is using the bots to pad numbers as well, but that isn’t a good look.


Whatever is happening in the Battlefield 2042 servers, many people likely won’t end up seeing anything, as it appears that Battlefield 2042 only has 2,800 players on steam at the time of this publication. Either way, let us know what you think is going on with Battlefield 2042 in the comments below.