Battlefield 2042 is now just a week away from launching, and if you're planning to play, be on the lookout for hardware driver updates that could improve the experience. Specifically, GPU driver updates. To that end, AMD is pushing out is Radeon Software Adrenalin 21.11.2 driver package, and with it comes some purportedly sizable performance gains in EA's upcoming shooter.
AMD often provides performance claims for whatever title or multiple games a driver release is optimized for, though sometimes just for a single graphics card. This time, however, AMD offered up some numbers for three of its desktop graphics cards based on RDNA 2. In all three cases, AMD is promising double-digit performance gains when playing Battlefield 2042 at a 4K resolution and with Ultra Settings.
So what are we looking at here? According to AMD, its flagship Radeon RX 6900 XT will net up to a 14 percent performance jump in Battlefield 2042 just updating to the latest 21.11.2 driver release. It also claims the Radeon RX 6800 XT will see a slightly bigger boost at 15 percent, while the Radeon RX 6700 XT stands to gain up to 11 percent, based on what's laid out in the release notes. 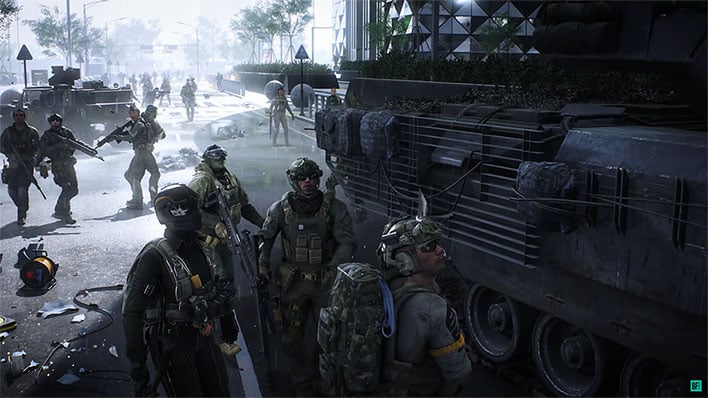 We haven't tested and benchmarked Battlefield 2042 yet, so we can't say what kind of performance overall to expect at 4K (or any resolution). But the minimum and recommended specs are out there. They include...
Minimum Requirements
Recommended Requirements
They're not too hefty overall, though obviously if you intend to play at 4K with Ultra Settings, you're going to need a burlier configuration than what the recommended requirements call for (let along the minimum requirements).
In any event, you can grab the latest GPU driver through the Radeon Software utility, or head to AMD's driver download page to install it manually. As for Battlefield 2042, it's available to preorder on PC for $59.99 on Steam, Origin, and Epic.