Players who are anticipating the launch of Battlefield 2042 will have to wait a little bit longer, following news of a delay. In a message posted to Twitter, Dice Studio GM Oskar Gabrielson broke the news, saying the new release date is November 19, 2021. That amounts to exactly four weeks from the game's original October 22 launch date.
Publisher Electronic Arts reiterated the news in a press release, saying the delay will not have an effect on its net bookings guidance for fiscal year 2022, that it provided back on August 4, 2021. Or put another way, it still anticipates selling a boatload of copies. And that's probably a fair assessment, given that three years have elapsed since Battlefield V came out (the original game—there's been several DLC/Seasons since then).
So why the delay? Gabrielson chalked it up to "unforeseen challenges" resulting from the pandemic. 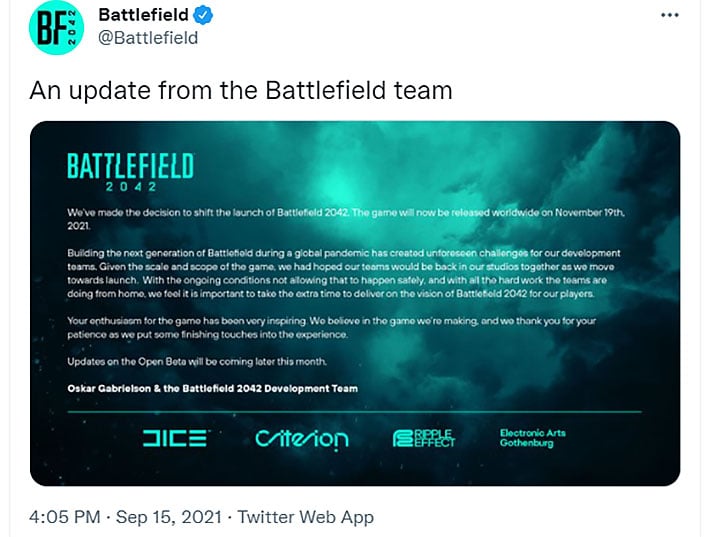 " Building the next generation of Battlefield during a global pandemic has created unforeseen challenges for our development teams," Gabrielson said.
"Given the scale and scope of the game, we had hoped our teams would be back in our studios together as we move towards launch. With the ongoing conditions not allowing that to happen safely, and with all the hard work the teams are doing from home, we feel it is important to take the extra time to deliver on the vision of Battlefield 2042 for our players," Gabrielson added.
The GM went on to thank players for their patience as the development team applies "some finishing touches" to the game, and said further updates on the upcoming open beta will be announced sometime later this month.
From a high level overview, the relatively short delay is understandable, considering the situation. And hopefully this eases any potential developer crunch rather than adds to it, a stressful practice that has drawn increased attention and scrutiny over the past couple years.
That said, the statement doesn't really provide any low level details, like what exactly still needs polished and whether the bulk of the last-minute work is aimed at improving the experience on consoles, PCs, or both. Speaking of which, DICE has previously confirmed Battlefield 2042 will offer crossplay between console and PC platforms.
To that end, multiplayer will support up to 128 players on the Xbox Series X/S, PlayStation 5, and PC. Here's hoping it ultimately lives up to the hype.