Ayaneo was one of the very first vendors offering hand-held gaming PCs. The earlier models from this and other companies used lower-end and lower-cost APUs from AMD to get their foot in the door. As they've seen success, newer models have been equipped with more recent and fancier hardware, including the processors, displays, and input hardware. Capping off this trend is the upcoming Ayaneo Next II, which will apparently venture into discrete graphics.


It would be pretty awesome to have a hand-held gaming machine with all the power of a PlayStation 5, wouldn't it? There's a few reasons that doesn't happen, but a lot of it comes down to the need to cram all your hardware as well as a big-enough battery into a tiny hand-held form factor. Valve resolved this by making the Steam Deck large enough to require a backpack for transport, and the Ayaneo Next II appears to be in the same size class, if not even bigger. 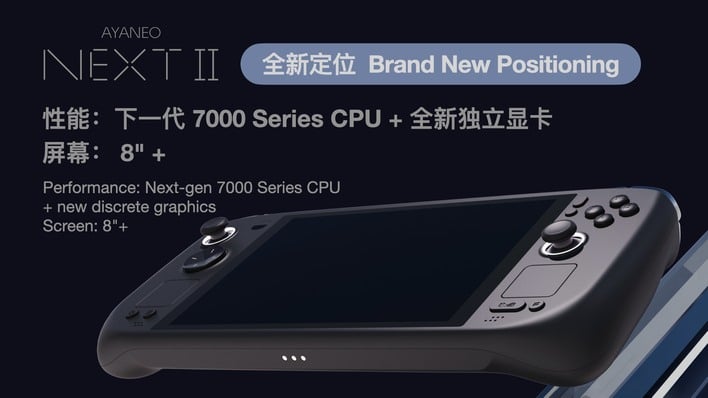 There are sadly scant few details on what will actually be in the Next II, but Ayaneo's teaser says that it will have a "next-gen 7000 series CPU". We have to remind everyone that AMD's logical-but-confusing naming scheme for its mobile processors means that a "7000 series CPU" could be anything from Zen 2 to Zen 4. The assumption Ayaneo probably wants us to make is that it's going to be a 7040 series, formerly known as Phoenix. Those chips will have Zen 4 CPU cores and RDNA 3 graphics, which leaves us wondering how powerful the discrete GPU will be.
Indeed, Ayaneo is promising the first handheld game system with discrete graphics. Yes, even the Steam Deck, as powerful as it is—it can run ray-traced games!—is relying on the integrated graphics of its APU. We do wonder what graphics processors will go into the Ayaneo Next II; it could be based on Navi 33 like the Radeon RX 7600M that AMD announced at CES. That chip will surely scale down, but even the lightest Radeon RX 7600S model only comes down to about fifty watts—an immense amount of heat to disperse in a handheld form factor.


Other features of note on the Next II include the addition of a couple of trackpads, mirroring the Steam Deck, as well as an 8" screen. It's likely, considering the high-end positioning of the Next in the Ayaneo family of products, that this will be an OLED, and it's also very likely that this handheld will use fancy Hall-effect joysticks for minimal drift and maximum reliability. 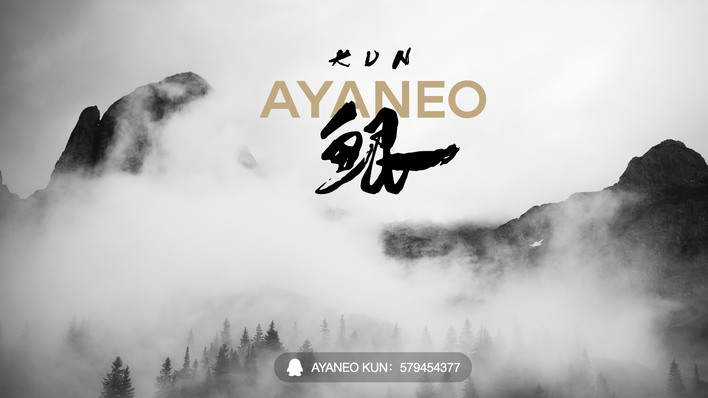 Ayaneo also announced another handheld with literally no details, simply called the "Kun." This pinyin can mean several different hanzi, and the one in the image is very messily-rendered, but we suspect it might be 鲲, which refers to new spawn or fry (freshly-hatched fish). Ayaneo says that the new model "carries the spirit of exploration of Next 2," so that could mean that the Kun will be another, perhaps even-higher-end handheld PC.

Honestly we're pretty curious about what the "discrete graphics" in the Next II could be. The performance of a Ryzen 7040 series APU's integrated GPU should probably be fast enough to be mistaken for discrete graphics, but the company is pretty clear about the machine actually having a discrete GPU, and not just "discrete-class" graphics. Given that Ayaneo only gives a release date of "2023" for the handheld, it's quite possible that the Next II could even be based on a hypothetical Navi 34 graphics part with a lower power rating.