Aya had originally hoped to launch its handheld Neo game console based on an AMD Ryzen "Renoir" APU last month, but after a short delay, the company is now accepting pre-orders, albeit only in China with what appears to be limited quantities at the outset. Nevertheless, it is here in Founder form, which is basically a special edition variant.
Called the Aya Neo Founder, it sports a translucent casing, and sort of looks like a PC version of the Nintendo Switch. Aya is apparently anticipating high demand to go along with whatever inventory it has available, hence why it is only available to pre-order in China for the time being.
"Aya is currently available for a limited time at a special price in China, with each machine having its own unique code. To prevent scalpers from raising the price, shipping overseas is not supported at this time. For overseas users, we may take a crowdfunding sale on IGG," Aya said.
It's a decent sized handheld with a 7-inch IPS display (1280x800), compared to the Switch's 6.2-inch touchscreen with a 1280x720 resolution, and the Switch Lite's 5.5-inch touchscreen, also with a 1280x720 resolution. Other than the general form factor, though, these are very different machines. 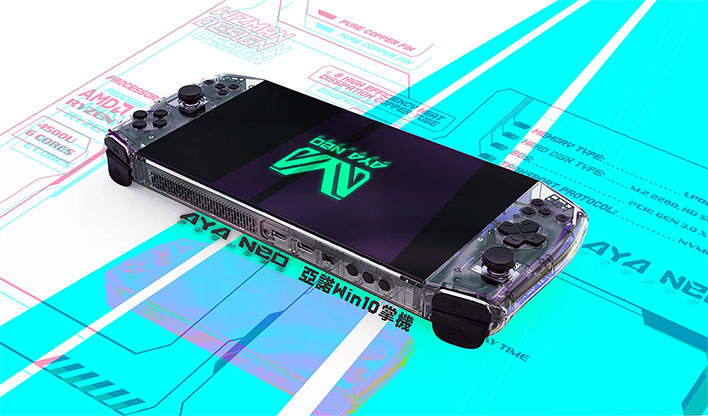 You'll notice there is no microSD card slot to add more storage. However, like a desktop PC or laptop, you can upgrade the M.2 SSD to something with more capacity, like 1TB or more, should the need arise. The RAM, however, is soldered to the motherboard, so you are forever stuck with 16GB (and have to hope it never goes bad).
It is an interesting kit for sure, and the final model could look a bit different—this is basically a working prototype design for early adopters. Aya will show it off at the WePlay show in Shanghai on November 14. Sometime after that it will likely find its way to an international crowdfunding campaign for potential buyers/backers outside of China.