Aya-Neo is promising "innovations never seen on a Windows gaming handheld" and that evidently includes next-gen AMD cores of some kind, according to a teaser the company posted on Twitter. While finer grain details are not yet available, Aya-Neo is planning to make an announcement on December 28, 2021. The timing is interesting for a couple of reasons.
For one, the Consumer Electronics Shows gets underway in early January 2022, and that is when a bevy of announcements will come pouring in (some more interesting than others, naturally). For example, it's rumored NVIDIA will unveil a new flagship graphics card, the GeForce RTX 3090 Ti, and AMD is expected to announce its refreshed Ryzen 5000 series outfitted with stacked 3D V-cache.
Therein lies the other reason why the timing of Aya-Neo's announcement is intriguing—it comes before AMD's CES livestream event (technically a pre-CES event). 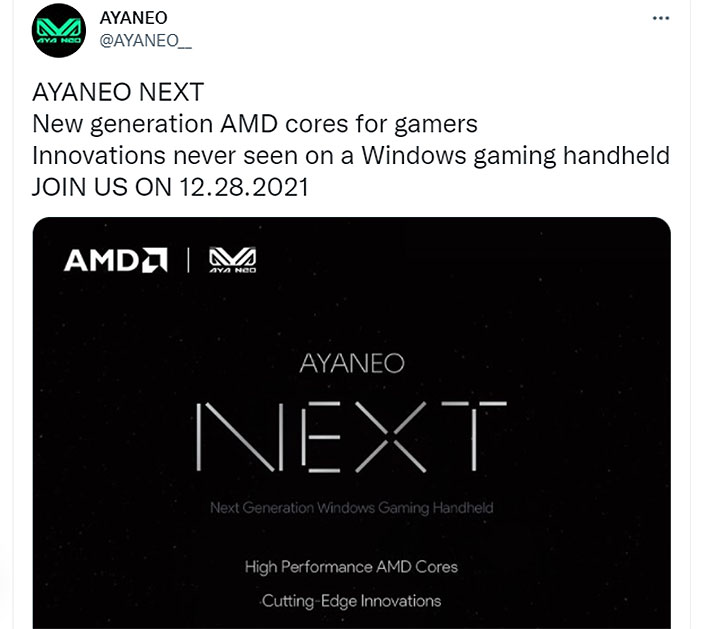 Aya-Neo's tweet teases "new generation AMD cores for gamers" in its "Next" handheld gaming system. The current Aya-Neo handheld also runs on AMD hardware, with a recently upgraded Pro model offering a Ryzen 7 4700U mobile processor built on a 7-nanometer manufacturing process. That chip packs an 8-core/16-thread configuration based on Zen 2, paired with integrated Radeon Vega 7 graphics.
It's a safe bet Aya-Neo isn't sticking a refreshed Ryzen 5000 series desktop CPU and discrete GPU into its next-gen handheld. So the question is, which system-on-chip will it end up using? There are several directions the company could go.
One is to follow in Valve's footsteps with its Steam Deck and adopt a custom Van Gogh SoC. Going in that direction would provide the Next handheld with Zen 2 CPU cores paired with RDNA 2 graphics.
Another option is Barcelo-U, which pairs Zen 3 CPU cores with Vega 7 graphics. And then there's Rembrandt-U, which will offer up 6nm Zen 3+ CPU cores with RDNA 2 graphics. Going with a Rembrandt-U foundation would be the most exciting for a 2022 handheld, but it's probably wishful thinking—we don't see Aya-Neo making that kind of announcement before AMD formally introduces Rembrandt-U. But maybe?

In any event, Aya-Neo has cranked up the hype dial, now the pressure is on to live up to it.