Before it came out, I distinctly remember being skeptical that Nintendo's hybrid Switch console would be a hit, considering it was going up against much more powerful hardware from the likes of Sony and Microsoft. Not only did it prove popular, the Switch has been a smashing success. As far as crowdfunding projects go, the same can be said (so far) of Aya-Neo, a handheld PC console that draws inevitable comparisons to the Switch.
After launching a Founder Edition crowdfunding campaign earlier this year and postponing broader availability, startup Aya says the handheld console is now ready for backers at large, and they came swooping in fast. It amassed pledges of over $1 million in the first 24 hours, and now sits at over $1.45 million from more than 1,600 backers, with 27 days remaining on the campaign. 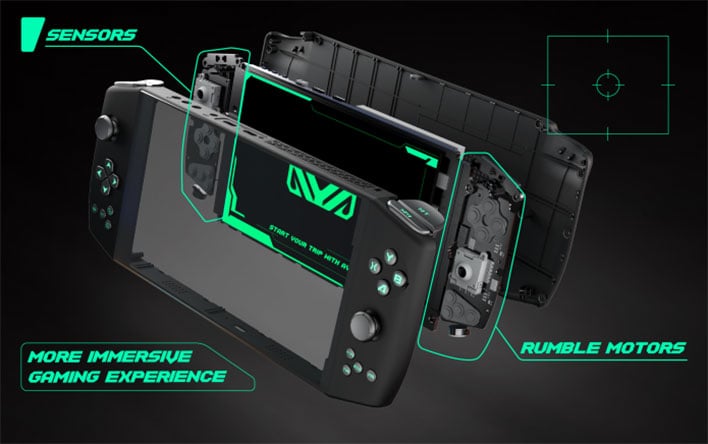 Aya is pitching the Aya-Neo on Indiegogo as the world's first 7-nanometer handheld gaming device. That is in reference to the Ryzen 5 4500U mobile processor that powers the thing. Manufactured on a 7nm node, the Ryzen 5 4500U is a Zen 2 APU wielding 6 cores and 6 threads with a 2.3GHz base clock and up to a 4GHz max boost clock, along with 8MB of L3 cache and 2MB of L3 cache.
On the graphics side, the APU is armed with AMD's Radeon 6 Vega graphics with 384 streaming processors, running at 1.5GHz. Other specs include 16GB of LPDDR4X RAM running at 4,266MHz, a 500GB or 1TB NVMe solid state drive, and a 7-inch IPS display with a 1280x800 resolution. On the connectivity front, it serves up three USB-C ports. 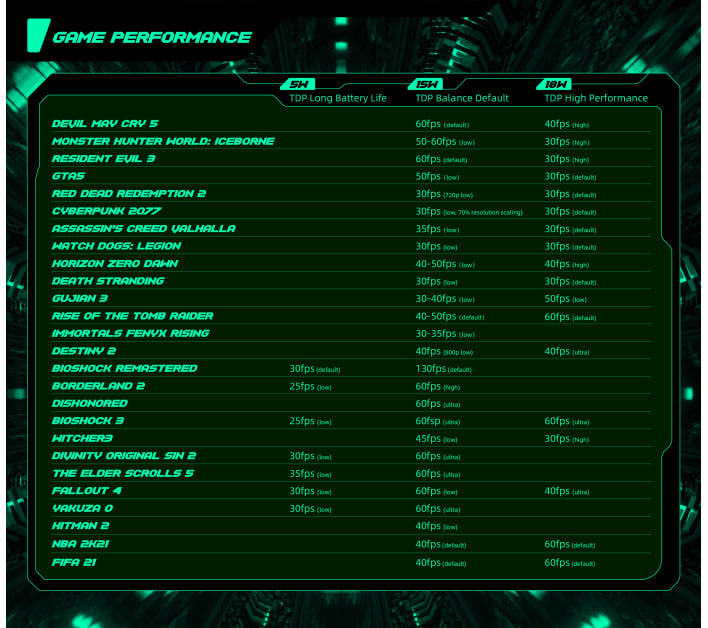 It's an intriguing game system, and according to Aya, it can maintain 30 frames per second in Cyberpunk 2077 at lower settings, and 60 fps in titles like Devil May Cry 5, Resident Evil 3, Fallout 4, and others. Performance depends in large part on the TDP profile—selecting the High Performance option bolsters the handheld's capabilities, at the expense of battery life.

The overall styling is very much reminiscent of the Switch, though it's obviously a different system with different features and capabilities. A pair of side controllers offer up rumble effects with a built-in motor, while a 6-axis gyroscope/accelerometer built into the device helps with precision aiming. There's a D-Pad, two clickable joysticks, a bunch of buttons, and shoulder triggers.
As for the battery life, Aya says the built-in 3-cell (47Whr) battery is good for up to 5-6 hours of gameplay at lower TDP settings. It also supports fast charging to bring it back up to 100 percent in 90 minutes.
Pricing started at $698 for the Super Early Bird models with 500GB of storage, but those are gone. At the time of this writing, the least expensive tier is $870 for the 1TB model (10 percent off). Or for $959, Aya is bundling in a docking station, joystick cap, a tempered glass screen protector, and a carrying case.