AMD Sets Date For CES Livestream: How To Watch And What To Expect

The annual Consumer Electronics Show in Las Vegas is just a few weeks away, and you can bet there will be a bunch of product announcements. The four-day event runs from January 5-8 (Wednesday-Saturday), though the day before it officially kicks off, AMD has scheduled a "Product Premiere" to talk about (and potentially launch) upcoming CPUs and GPUs.
AMD announced the CES event (well, technically pre-CES) on its website and social media, saying it will be livestreamed for anyone who wants to join. And it promises to be an interesting one—AMD says it will demonstrate how it will "make 2022 an unforgettable year for gamers, creators, and mobile PC users." Sounds grand to us. 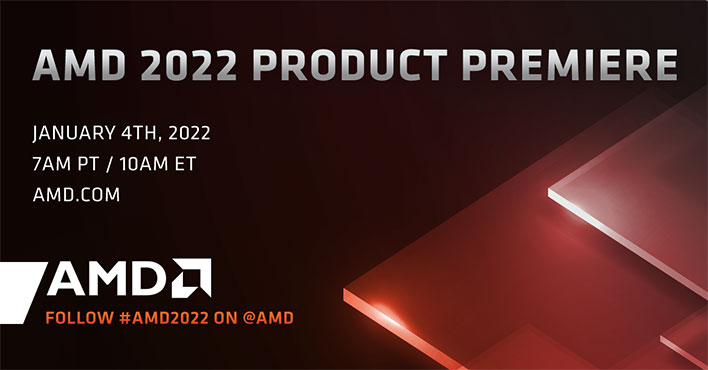 The livestream will take place on Tuesday, January 4, 2022 at 10am ET (7am PT). On Twitter, AMD says, "We can’t wait to showcase our latest innovations in high-performance computing – see you then!"

What To Expect During AMD's Product Premiere Event

At first glance, one would think the event would be entirely focused on HPC products, but that's not actually the case. In no uncertain terms, AMD says the event will also "highlight innovations and solutions featuring upcoming AMD Ryzen processors and AMD Radeon graphics," both of which are consumer product categories. 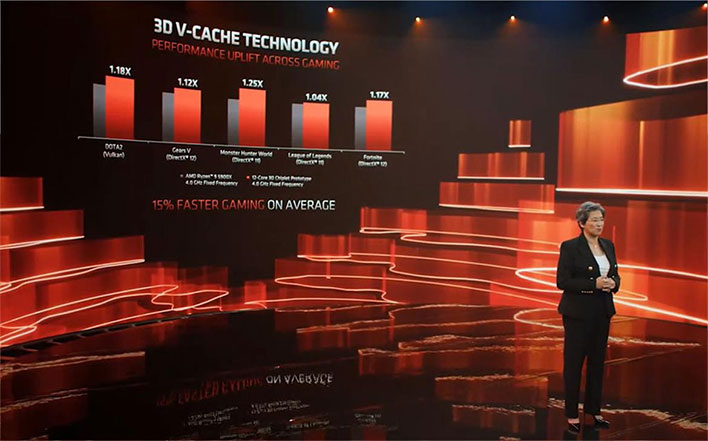 As to what exactly we can expect, it seems a foregone conclusion that AMD will unveil its refreshed Zen 3 processors featuring stacked 3D V-cache. AMD talked about the refresh this past summer, saying the addition of 3D V-cache to its Ryzen 5000 series will deliver a 15 percent performance gain in some applications, and notably gaming. AMD CEO Dr. Lisa Su even showed off a prototype Ryzen 9 5900X processor with the added cache, at the time noting it featured 64MB of 7-nanometer SRAM cache directly on top of each core complex die (CCD), the effectively triple the amount of high-speed L3 cache (192MB) that is fed to the Zen 3 CPU cores.
The Zen 3+ refresh will be fundamentally the same CPUs as the extant Ryzen 5000 series, but with much more cache. However, this is a long-term design strategy, and we also anticipate stacked 3D V-cache being a part of Zen 4. It's likely AMD will at least provide some kind of update on Zen 4, though it probably won't get into too many fine grain details at this still-early stage.
We may also see AMD announce its Ryzen 6000 series APUs codenamed Rembrandt. It's expected AMD will offer both Ryzen 6000U and Ryzen 6000H product lines, both of which will pair Zen 3 CPU cores with RDNA 2 graphics.
The rumor mill has been eerily quiet about new Threadripper CPUs, though we won't rule out those either. And on the discrete GPU side, AMD could announce new additions to its Radeon RX 6000 series, including Radeon RX 6500 XT and 6400 cards. These will be budget entries, though we'll have to wait and see how pricing and supply shakes out.
Of course, AMD could surprise us with products and technologies that have flow under the rumor radar. Tune in to find out.