AYA Neo is on an absolute tear when it comes to new handheld PC gaming console launches and announcements. It looks like the strategy is to offer varying models and features at practically every price point. Earlier this week, for example, we wrote about the Air Plus powered by AMD's Mendocino platform, starting at $289. Following up on that, AYA Neo is now talking up a more powerful Geek 2 handheld.
AMD's Mendocino release is an interesting product launch, in that it serves up Zen 2 CPU cores with RDNA 2 graphics aimed primarily at lower cost laptops. It's evidently already found its way to the handheld PC gaming space, though if a recently leaked block diagram turns out to be accurate, it might not have all that much graphics firepower to throw at games—just two compute units (CUs). For reference, the Steam Deck is built around a custom Aerith SoC that pairs Zen 2 cores with eight RDNA 2 CUs. 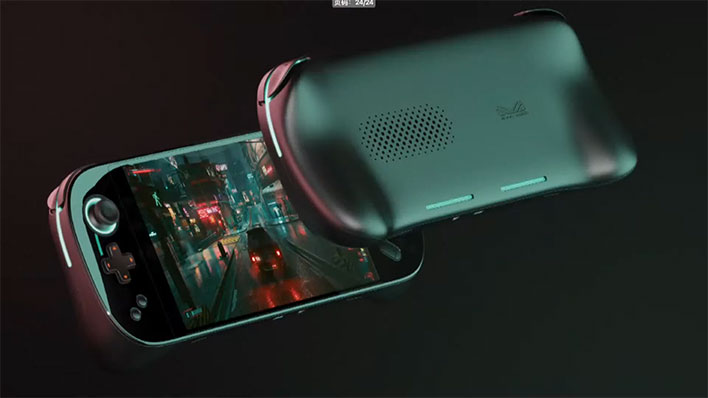 Other specs include 16GB of RAM, 512GB or 1TB of built-in storage, Wi-Fi 6 connectivity, USB4 connectivity, a microSD card slot, a fingerprint sensor, and a 7-inch display with either a 700p or 1200p resolution. On the software side, it supports Windows 11 and AYANEO OS.
There's some decent firepower on tap here. The caveat is the pricing, though it's not absurd. The Ryzen 5 6600U model will start at $699 in the US, or $619 if participating in the crowdfunding campaign and jumping on an early bird order. Meanwhile, the Ryzen 7 6800U will run $799 and likely lower for early bird pricing as well. Those are not too far off from the top-end Steam Deck configuration, which runs $649.