The landscape of relatively affordable handheld PC gaming consoles is beginning to expand. Up to this point, Valve's popular Steam Deck has largely flown solo in this space (other handhelds on par with its power and capabilities have been priced much higher up to this point), but just within the past week at least two new contenders have emerged—the AYN Loki, which we wrote about a few days, and AYA Neo's Air Plus.
To briefly recap, the AYN Loki starts at $299 for a modest Alder Lake U configuration with integrated graphics, followed by four higher-end SKUs built around either a Ryzen 5 6600U or Ryzen 7 6800U, both of which are Zen 3+ APUs with RDNA 2 graphics. Prices for those configs range from $499 to $799, versus the Steam Deck's $399 (64GB eMMC), $529 (256GB NVMe SSD), and $649 (512GB high speed NVMe SSD) price points.
AYA Neo looks to challenge both with several Air handheld consoles, and in particular the Air Plus built around AMD's recently announced Mendocino processors.

AYA Neo revealed the Air Plus during a three and a half hour livestream over the weekend. Unfortunately for us it's not in English and subtitles are not available, but some stills and live action shots starting at around the 2hr18min09sec mark reveal some interesting tidbits about the upcoming handheld gaming console.
Foir one, this is being billed as the world's first Mendocino handheld. AMD announced Mendocino during its Computex 2022 keynote last week, and then we had chance to discuss the chips a little further with AMD Director of Technical Marketing, Robert Hallock, during our 2.5 Geeks webcast last Thursday (fast forward to the 10min24sec mark).
The skinny on Mendocino is that's a line of low cost processors intended for entry level systems (laptops, mostly) priced between $399 to $699. They're manufactured on TSMC's 6-nanometer node and pair 4-core/8-thread Zen 2 CPU cores with RDNA 2 graphics, similar to the custom Aerith SoC inside the Steam Deck.
Using Zen 2 cores allows AMD to keep the price down while still offering an attractive combination of CPU and GPU horsepower. This is what makes Mendocino such a good candidate for a handheld gaming PC, and AYA Neo is ready to pounce on the platform. 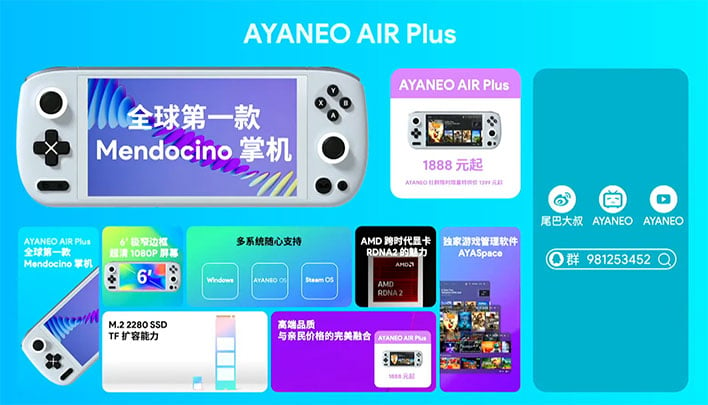 Only a few details about the AYA Neo Air Plus are available at the moment. It's confirmed to ship with a 6-inch display, an M.2 2280 form factor SSD, and microSD card reader. We also know it will feature the company's AYA Space game launcher, and will support AYA Neo OS, Windows, and Steam OS.

The big question is, how will it perform, particularly in relation to the Steam Deck? We don't have an answer yet. Rumor has it that the GPU core count on Mendocino will be as few as two compute units (CUs), versus the eight CUs the Steam Deck is rocking. That would put the Air Plus at a graphics performance disadvantage, but we'll have to wait and see.
If nothing else, the pricing is certainly attractive. At $289, this is one of the more affordable handhelds out there. In addition, AYA Neo will offered an early bird special where crowdfunders will be able to buy the system for just $199.