ASUS on Wednesday introduced the ZenFone 7 Pro and ZenFone 7, both with an "evolved Flip Camera" design. It is actually the same general mechanism as implemented on the previous generation ZenFone 6, but with three camera sensors instead of two. This paves the way for ASUS to claim it offers the "world's first triple Flip Camera."
"ZenFone 7 Pro leads the way in mobile photography, with triple front and rear cameras mounted in the unique Flip Camera module. This motorized flip-up module now features a 64MP wide-angle main camera, an ultrawide-angle camera, and a telephoto camera with 3x optical zoom, so it's easy to capture the very best photos," ASUS says.
Indeed, the motorized flip-up module does lead to some potentially interesting shots that are easier to take, compared to a traditional smartphone like Samsung's Galaxy Note 20. For example, if you're sitting underneath a tree and want to a get a shot from the bottom looking up, the module can do that, as well as provide an angled view. You can do the same with a regular smartphone, but it's a bit unwieldy, when using the rear cameras. 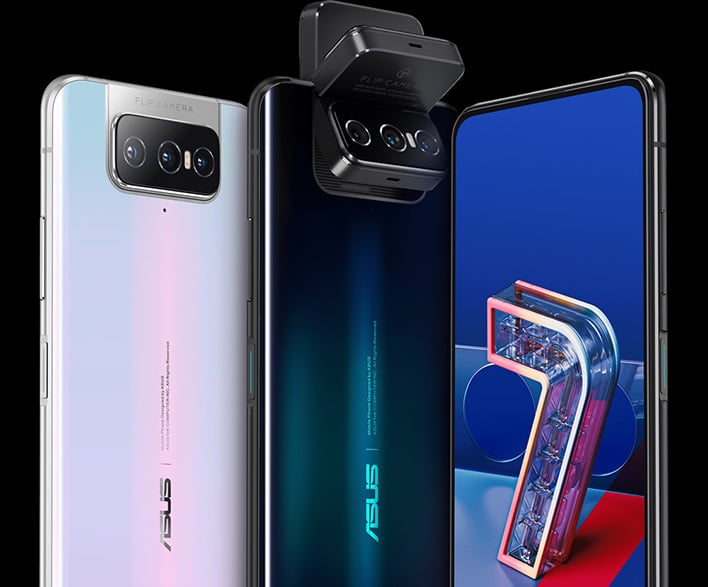 This solution also provides an end-around to having a display notch or a punch-hole in the front, since both the front and rear camera chores are served by the flip-up module. It's a clever design for sure. Those two other lenses, by the way, are 12MP with a 113-degree field of view (ultrawide) and 8MP (telephoto). They lack optical image stabilization on the ZenFone 7, but have it on the ZenFone 7 Pro.
According to ASUS, the improved flip-up module can withstand 200,000 motions, up from 100,000 in the previous iteration. That means you could flip the module up 100 times a day for five years before it finally stops working.
Both phones sport a 6.67-inch AMOLED display with a 2400x1080 resolution and fast 90Hz refresh rate. And they both offer a 92 percent screen-to-body ratio. Good stuff.