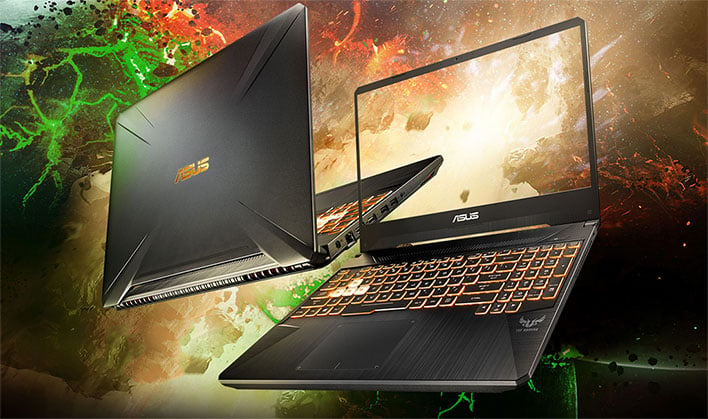 You can definitely count ASUS among the hardware makers that will be releasing laptops built around AMD's recently announced Ryzen 4000 series of mobile processors based on the Zen 2 CPU architecture. Some of the upcoming models have already been leaked, and now an actual photo (read: not a press render) has emerged of an ASUS TUF Gaming laptop with a Ryzen 9 4900H inside.
Part of what makes this interesting is that AMD has not announced a Ryzen 9 4900H yet. If you head over to its Ryzen 4000 series product page, you will find the following CPUs listed...
All of the above models have onboard graphics based on AMD's Vega GPU architecture, with frequencies ranging from 1.4GHz to 1.75GHz. So, how does the Ryzen 9 4900H compare? And how does the ASUS TUF Gaming laptop figure into the equation?

The folks at Videocardz got their mitts on a photo of the laptop in question. This particular model features a Ryzen 9 4900H paired with 16GB of RAM. It also features a 1TB NVMe M.2 SSD + 1TB HDD, Wi-Fi 5 (802.11ac) + Bluetooth, an HD webcam, and a 48Whr battery.
According to the sticker, the Ryzen 9 4900H is capable of boosting to 4.2GHz, which is the same as the Ryzen 7 4800H. Assuming that is accurate, it's not clear what would separate the two models—base clocks, cache arrangement, graphics cores, and graphics frequencies could all come into play (and incidentally, the sticker on the TUF Gaming laptop does not reference any discrete graphics).
Past leaks have pegged the Ryzen 9 4900H as being an 8-core/16-thread CPU with a 3GHz base clock and 45W TDP. In addition, it's said there will be a Ryzen 9 4900HS with a 35W TDP, which has been associated with an unreleased ASUS G14 ROG Zephyrus laptop. Interestingly, that leak showed the HS version rocking a 4.4GHz boost clock.
It doesn't make sense to us that the lower wattage part would boost higher than the higher wattage version. So as always, take these leaks with a dose of a skepticism, at least as they pertain to the specifications. These laptops are coming, we have little doubt about that, but we'll have to wait and see how the frequencies pan out.