ASUS just can't seem to keep a lid on its upcoming laptop releases, and that is definitely the case with the new ASUS TUF Gaming A17 (FA706QR-HX004). A listing for the laptop was listed prematurely by Romanian retailer Altex, and it revealed all the details for the impressive new machine.

Although the page has since been pulled, the information is still accessible via Google Cache. First and foremost, the machine is powered by a Ryzen 7 5800H processor, which AMD is expected to announce next week. The Ryzen 5000 Zen 3 series is expected to be a hot item during the first half of 2021, so expect to see many of announcements in the coming weeks. The Ryzen 7 5800H reportedly is an 8-core/16-thread processor with a base clock of 3GHz and a boost clock of 4.3GHz. 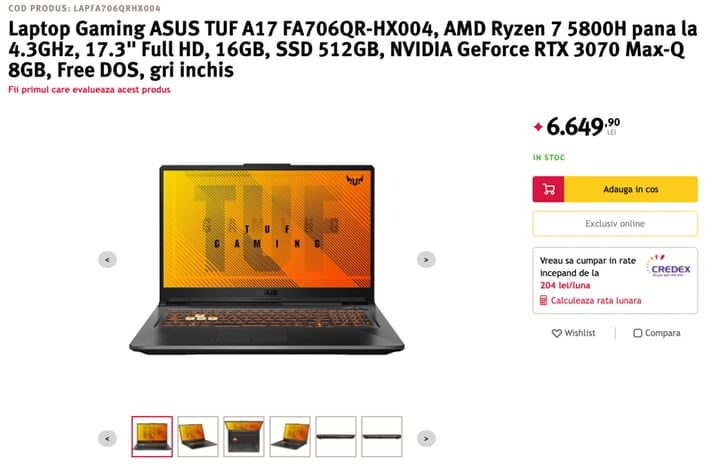 Looking at the other specs, it appears that the FA706QR-HX004 will have 16GB of DDR4 memory, a 512GB SSD, Wi-Fi 6 and Bluetooth 5.1. As for the display, we're looking at a 17.3-inch Full HD panel with a 120Hz refresh rate according to the product listing. There are also a handful of USB 3.2 Type-C ports with DisplayPort 1.4 support, and an HDMI 2.0b port. As you might expect, G-SYNC is supported.

The FA706QR-HX004 is priced at 6649 (RON), which converts to around $1,674 here in the United States. We can't completely rely on currency conversion for an exact price here in the U.S., but it at least gives us a ballpark figure. We expect to hear more about the ASUS TUF Gaming family along with the complementing ROG Strix and ROG Zephyrus gaming laptop families next week at CES 2021.