ASUS is a company that isn't afraid to take design risks with its laptops. That is even more apparent with today's announcement of the ROG Zephyrus Duo 15 gaming laptop, which features dual screens (as its name implies).

The primary point of focus is on the 15.6-inch display, which is available either as a 300Hz Full HD panel or with an optional 4K 60Hz panel. Neither display supports touch input, which probably isn't that big a deal considering that these laptops are aimed primarily at gamers. 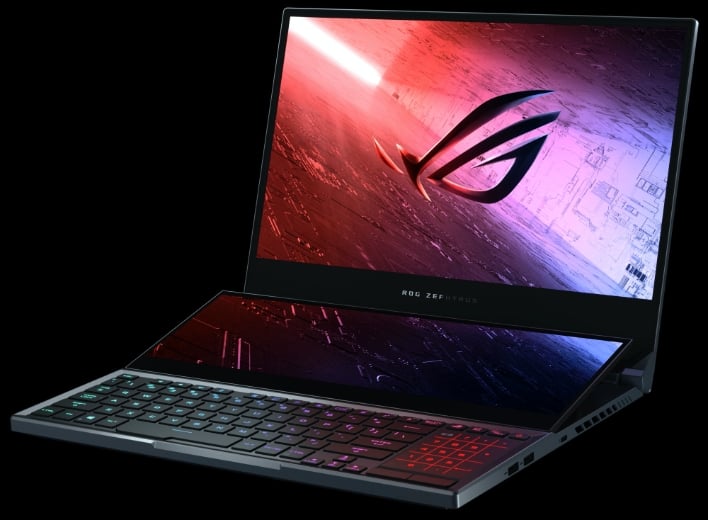 The secondary display, called the ROG ScreenPad Plus, is situated above the keyboard and tilts up at a 13-degree angle when the laptop is opened. It measures 14.09 inches diagonally and has a resolution of 3820x1100. Given that ASUS is expecting gamers to interact directly with this secondary screen, it is touch-enabled.

ASUS says that it is working directly with game developers to add support for the ROG ScreenPad Plus, and Dying Light 2 will come be among the first with native support. ASUS has also partnered with Overwolf to use the secondary display to show real-time stats in games like Fortnite and League of Legends. There's also the possibility for gamers to move chat controls to the ROG ScreenPad Plus, while the game action takes place on the primary display.

In addition, ASUS has a suite of its own utilities that are optimized for the 14.1-inch display:

Companion functions optimized for the ROG ScreenPad Plus also speed up day-to-day work and play. Task Group lets you take snapshots of your ideal app arrangements across both screens and open those apps instantly with a tap of the associated Task Group icon. ROG Armoury Crate has a built-in resource monitor that lets you track vital stats like CPU and GPU frequencies at a glance. And streamers can easily run a broadcast and game simultaneously with an interface optimized for the secondary screen thanks to XSplit Gamecaster.

Getting down to brass tacks, the ROG Zephyrus Duo 15 is powered by 10th generation Intel Core i7 and Core i9 Comet Lake-H processors, up to a Core i9-10980HK. 16GB of DDR4-3200 memory comes standard, but the laptop can support up to 48GB. Graphics options include the newly announced GeForce RTX 2070 Super and RTX 2080 Super. When it comes to storage, there are two M.2 slots available, supports up to 1TB SSDs (RAID-0 is supported). 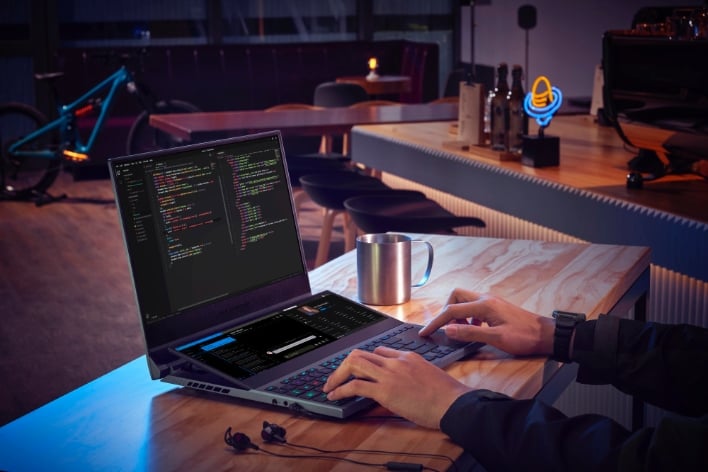 Wired connectivity options abound as there are three USB 3.2 Type-A ports, one Thunderbolt 3 port, one HDMI 2.0b port, and a GbE port. Wireless connectivity is achieved with Bluetooth 5.0 and a Wi-Fi 6 radio. Rounding things out are a chiclet-style keyboard (with per-key RGB lighting), a trackpad mounted to the right of the keyboard, and a 90 Whr battery pack.

According to ASUS, the ROG Zephyrus Duo 15 will begin shipping in May -- pricing will be announced closer to launch.