AMD is finally getting ready to counter NVIDIA's mobile GeForce RTX 30 series with a new generation of mobile GPUs of its own, and namely the Radeon RX 6000M family. The expectation is that AMD will make a formal announcement at Computex. Whether that is the case or not, however, some leaked retailer listings leave little doubt a launch is imminent.
In particular, an upcoming gaming laptop from ASUS that has gone all-in with AMD's latest generation hardware is making the rounds. It is the ASUS ROG G513QY-HF002T, and according to a listing at Microaid, a retailer in Ireland, the laptop will be in stock on June 9, 2021. As configured, the asking price is €1,947.44, which is around $2,375 in US currency.
This looks to be a powerful gaming laptop that pairs a Ryzen 9 5900HX processor with a Radeon RX 6800M mobile GPU, along with 16GB of DDR4-3200 RAM, a 1TB solid state drive, Wi-Fi 6 (802.11ax) connectivity, an assortment of USB 3.2 ports, and a 90Wh battery.
We already know about the processor—it's based on AMD's latest Zen 3 architecture and is an 8-core/16-thread chip with a 3.3GHz base clock, 4.6GHz max boost clock, and 16MB of L3 cache. It sits near the top of AMD's mobile CPU stack, behind only the similarly spec'd Ryzen 9 5980HS and 5980HX, both of which boost to 4.8GHz. 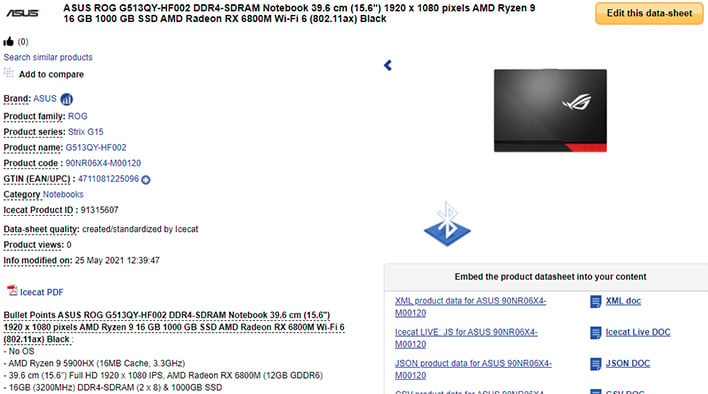 The GPU is the semi-mysterious part, as the Radeon RX 6000M series does not officially exist. Incidentally, the same laptop model is also listed at Icecat (shown above), an open catalog site in the UK, that shows the Radeon RX 6800M as having 12GB of GDDR6 memory.
No other specifications are mentioned, though rumor has it the Radeon RX 6800M will feature a Navi 22 GPU with 2,560 stream processors, along with a 192-bit memory bus, for 336GB/s of memory bandwidth. And of course the GPU is based on AMD's second generation Radeon DNA (RDNA 2) architecture. Paired with one of AMD's top mobile CPUs, the ROG laptop could potentially deliver some big-time gaming performance.
The caveat is pricing, at least on a top-end configuration. However, the introduction of another potent mobile GPU series creates competition in the marketplace, because as things stand, gaming laptops with GeForce GPUs are really the only interesting options. That will presumably change this summer.