It is a pretty safe bet that AMD will introduce a range of mobile GPUs based on its latest generation RNDA 2 graphics architecture—essentially a porting of the Radeon RX 6000 series over to laptops. Exactly when and what specific SKUs will launch are both wait-and-see things. While we wait to see what emerges from AMD, the company seems to have partially tipped its hand in its latest GPU driver.
Following the release of its Radeon RX 6700 XT graphics card on the desktop, AMD was quick to push out a new GPU driver earlier this week, Adrenalin 2020 Edition 21.3.1. It offers official support for the new card, as well as brings Radeon Boost support to DirectX 12 with variable rate shading in select games, and a new stress testing tool, among other highlights. All good stuff, but one of the more interesting tidbits is a reference to an unannounced Radeon RX 6800M GPU for laptops.
Have a look... 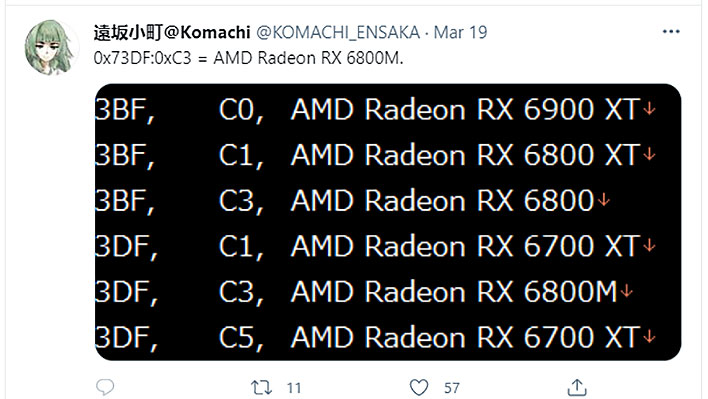 Prominent leaker Komachi discovered the reference to a laptop GPU sitting within the latest driver, hidden somewhat in plain sight. It is listed next to device ID 73D5:C3, and is wedged in between two versions of the Radeon RX 6700 XT with different power ratings. So, what exactly does this inadvertent disclosure really tell us?
It seemingly confirms AMD's next high-end mobile GPU will be the Radeon RX 6800M. The Radeon RX 6000M series as a whole will replace the Radeon RX 5000M series, which were rather lackluster next to the competition. Looking ahead, we are hopeful AMD's RDNA 2 architecture will bring a better competitive effort to mobile graphics, with compelling laptops pairing the Radeon RX 6800M with a Ryzen 5000 series mobile CPU based on Zen 3.
The GPU's positioning in the driver code also suggests it will deliver performance in the neighborhood of a Radeon RX 6700 XT. That could depend on the specific variant, though. Just as NVIDIA has given its hardware partners leeway in how they configure each of its mobile Ampere GPUs, it is rumored the Radeon RX 6800M based on Navi 22 will come in different TGP packages as well (C1, C5, and C3), with different clockspeeds.
If in fact the Radeon RX 6800M is basically a port of the Radeon RX 6700 XT, it will feature 40 compute units and 2,560 stream processors. The big question mark is the memory arrangement—it's possible the part will debut with 12GB of GDDR6 tied to a 192-bit memory bus, delivering 336 GB/s of memory bandwidth.
How it all actually works out is not yet know for sure, obviously. But given that the Radeon RX 6800M has made a driver cameo, it seems we will find out in the very near future.