Most people probably don't associate 2-in-1 convertibles with gaming, at least for the most part, because they're typically built for productivity tasks and general purpose computing. That's not always the case, though. Proving otherwise, ASUS today announced the ROG Flow X16, a thin and light convertible brimming with "gaming horsepower that belies its size."
I'm personally still a fan of big and bad 17-inch laptops, but am genuinely intrigued by what ASUS is serving up here. It's a 16-inch laptop built around what ASUS is calling an "ROG Nebula HDR display." Behind that fancy talk is a 2560x1600 resolution (16:10 aspect ratio) with a 165Hz refresh rate, 3ms response time, and mini LED backlighting. It also qualifies as a FreeSync Premium Pro display.

Mini LED rocks, and the rest of the display specs look nifty as well. For the record, ASUS is pretty hyped about its Nebula panels. Here's what it has to say...

"If there's one thing that makes the Flow X16 stand out, though, it's the stunning Nebula HDR Display. It adheres to all the specs of our Nebula certified panels: 100% coverage of the DCI-P3 color space, Pantone Validation, high refresh rate, Adaptive-Sync, and a response time of 3 milliseconds or less. But the Nebula HDR panel goes one step further. 512 Mini LED dimming zones and a peak brightness of 1100 nits create stunning contrast and allow vibrant, colorful images pop off the screen, while ROG’s Nebula HDR engine works alongside AUO’s AMLED technology to reduce haloing, thanks in part to a polling rate of 5400Hz." - ASUS 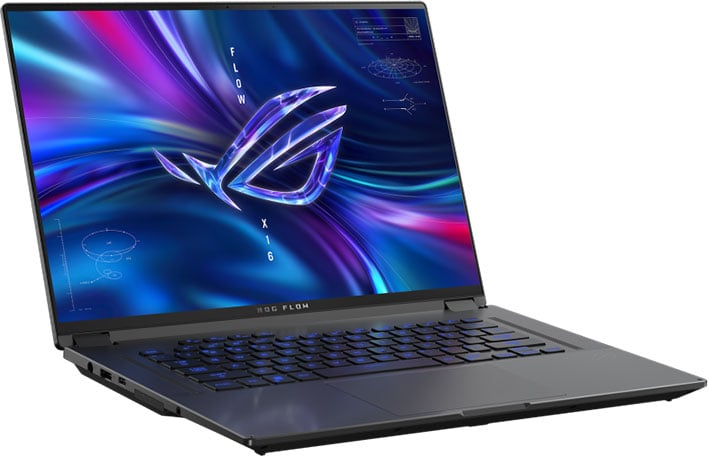 This is an optional upgrade over a standard QHD display (read: not mini LED) with the same refresh rate and response. Both also offer 100 percent coverage of the DCI-P3 color space, but the Nebula HDR adds to HDR support to the mix and will get much brighter.

As for the convertible aspect, the ROG Flow X16 utilizes a 360-degree hinge for flexible orientations, including traditional clamshell, tent mode, or tablet mode. You could also lay it completely flat if you really wanted to.
Moving on, there's some notable hardware that extend beyond the display. Buyers can choose between a Ryzen 9 6900HS or Ryzen 7 6800HS processor, both of which are potent Zen 3+ parts. Other options include up to 64GB of DDR5-4800 RAM and up to 2TB of fast PCIe Gen4 SSD storage.
For graphics, Intel is offering a choice between three GeForce RTX 30 series mobile GPUs, including the GeForce RTX 3070 Ti, GeForce RTX 3060, and GeForce RTX 3050 Ti. Here's how they're configured...

There's ample firepower on tap, though if it's still not enough, you can connect the ROG Flow X16 to the company's XG Mobile, an external GPU that also acts as a docking station with additional ports on tap.
Connectivity options include an interface for the XG Mobile, plus two USB 3.2 Gen 2 Type-A ports, a USB 3.2 Gen 2 Type-C port, an HDMI 2.0b output, 3.55mm audio combo jack, and a microSD card reader.
To keep everything cool, ASUS outfitted its 2-in-1 with its new Pulsar heatsink.
"Comprised of ultra-thin copper cooling fins as slim as 0.1mm, this double-sized heatsink has total surface area of 110,902mm², making it extra dense without limiting airflow. Combined with the Frost Force cooling system and Thermal Grizzly’s liquid metal thermal compound on the CPU, the Flow X16 is redefining what thin and light gaming looks like," ASUS says.
The ROG Flow X16 will start at $1,950, with the flagship configuration commanding $2,700.