There's a lot to consider when buying a gaming monitor these days, more so than ever before. There are the basics, like screen size, resolution, and refresh rate. But then you have adaptive sync implementations and, more recently, if HDMI 2.1 connectivity is part of the package. In an apparent attempt to check all (or most) of the desirable boxes, ASUS is launching a 32-inch display that should appeal to PC and console games alike.
One of the standout features on the new ROG Strix XG32UQ is the inclusion of two HDMI 2.1 ports (in addition to a DisplayPort 1.4 input, a 3.5mm headphone jack, and two USB 3.2 Gen 1 Type-A ports). That alone doesn't necessarily mean much because, for whatever reason, the standards body (HDMI Forum) that oversees official HDMI specifications thought it was a good idea to make certain features of the HDMI 2.1 protocol optional, including variable refresh rate (VRR) and auto low latency mode (ALLM) support. 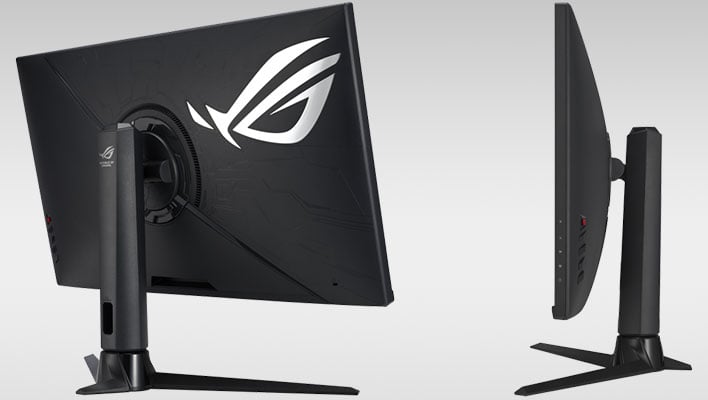 That isn't the case with the XG32UQ. ASUS explicitly lists support for both features, and further points out that there's enough bandwidth (48Gbps) for Xbox Series X and PlayStation 5 gamers to play at the monitor's native 4K resolution at 120Hz without chroma subsampling.
PC gamers can crank the refresh rate even higher—up to 160Hz via overclocking. Built around an IPS panel, this is also a FreeSync Premium Pro display with G-Sync Compatible certification. The implication there is that you can pair it with a Radeon or GeForce graphics card and take advantage of FreeSync or G-Sync for tear-free gaming.
ASUS claims the XG32UQ can hit a peak brightness of 600 nits. This ties in with its DisplayHDR 600 certification, which is a step up from DisplayHDR 400, though if HDR is your end game, you're probably want to shop for a display that can hit 1,000 nits.
As for image quality, ASUS says the XG32UQ offers 130 percent coverage of the sRGB color space, and 96 percent of the DCI-P3.
The ROG Strix XG32UQ looks promising on paper with a nicely balanced list of specs and capabilities. It will come down to how it actually performs (we haven't tested this model) and pricing, the latter of which has not yet been announced.