The transition to DDR5 memory on a large scale is going to take some time—it will likely be years before DDR5 outpaces DDR4, even as more platforms arrive that support the newer memory standard. As such, the beginning of the transition phase can be a bit clumsy, particularly right now as there's also a DDR5 shortage making things difficult. Could a DDR5 to DDR4 adapter make things easier? Regardless of the answer, a prototype apparently exists.
A video of the prototype was posted to YouTube by Lin Dabing Bing, who according to his profile hails from the ASUS ROG motherboard research and development unit in Taipei. It appears to be a legitimate claim, based on dozens of other videos he has posted over the past two years, all of which are related to ASUS in some way.
The video identifies the module as a DDR5 to DDR4 adapter, which sounds backwards, but it just means it is converting a DDR5 DIMM slot into being compatible with a DDR4 memory module. 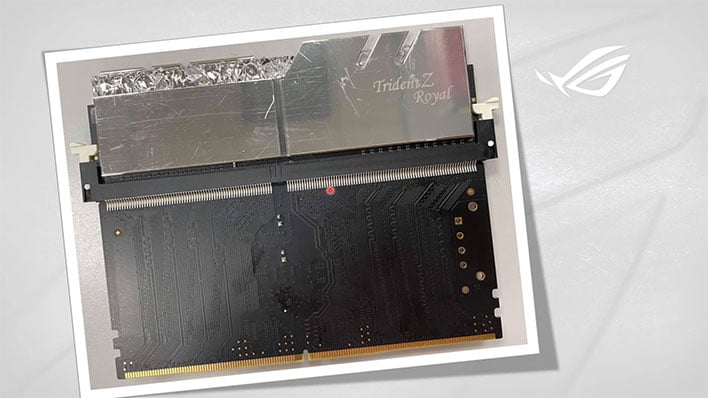 The clever device is bulky and looks kind of garish when installed in a motherboard. But beyond the aesthetics lies a clever piece of engineering. It slots into a DDR5 memory slot just if you were installing a memory module, and then the DDR4 stick slots into the top. In this case, Bing opted for a G.Skill TridentZ Royal DDR4 module.

It may seem simple, but there's a lot going on here. DDR5 is a 32-bit per channel solution, whereas DDR4 is 64-bit per channel. DDR5 also handles its own power management with an integrated IC, while the motherboard does the same for DDR4.
Then there is the motherboard's firmware to consider. In the demo on YouTube, Bing installed the prototype adapter into an ASUS ROG Maximus Z690 Apex motherboard that had been flashed with a special BIOS to allow this to work.
In all reality, this is likely not something that will become a shipping product and/or break into the mainstream mold. There is at least a narrow use-case, that being the prospect of buying a DDR5 motherboard and installing existing DDR4 RAM (or buying less expensive DDR4 memory) into it before upgrading to DDR5 down the road. But even if this existed, most people would probably just go in one direction or the other.
Still, it's a neat concept, and worth watching the video (embedded above) if you have around eight minutes to spare.