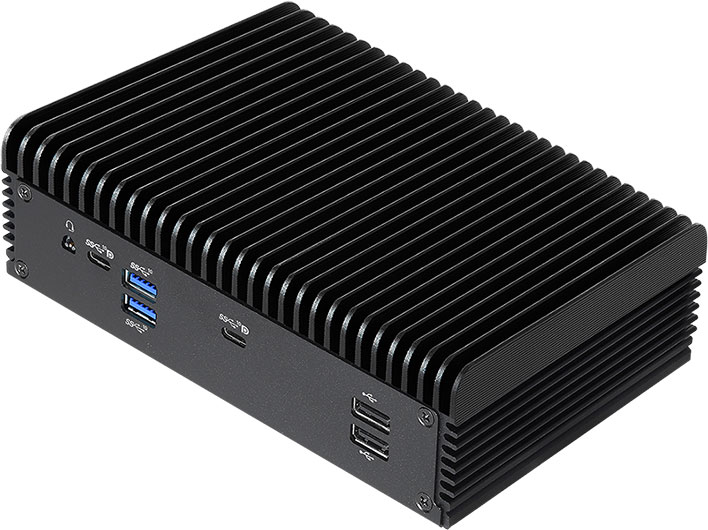 It took ASRock all of a nanosecond to implement AMD's newly minted Ryzen Embedded V2000 series chips into a couple of fanless mini PC, those being its "versatile" iBox-V2000M and iBox-V2000V. These tiny PCs measure just 171.8mm (L) x 109.45mm (W) x 50.05mm (H) and come with either a 6-core/12-thread or 8-core/16-thread CPU.
AMD itself has just launched a new generation of Ryzen Embedded CPUs. Its new V2000 series is based on the company's Zen 2 CPU architecture, not Zen 3 like its desktop Ryzen 5000 series and upcoming EPYC Milan server chips. The embedded category does not have the same need for bleeding edge technology, and the step up to Zen 2 still offers significant performance advantages over the previous V1000 generation.
ASRock is taking aim at a wide variety of market segments with its latest iBox-V2000 series. They mainly include embedded, industrial, and edge categories, such as retail, automation, automotive, entertainment, and smart cities.
The iBox-V2000M comes equipped with a Ryzen Embedded V2718 processor, which wields 8 cores and 16 threads clocked at 1.7GHz to 4.15GHz, along with seven Radeon CUs clocked at 1.6GHz. Meanwhile, the iBox-V2000V sports a Ryzen Embedded V2516 chip with 6 cores and 12 threads clocked at 2.1GHz to 3.95GHz, with six Radeon CUs clocked at 1.5GHz.
Each of these mini PCs offer users a pair of SO-DIMM slots supporting up to 64GB of DDR4-3200 memory, and M.2 and SATA 6Gbps (one each) ports for storage.

I/O options on the front of these mini PCs include two USB 3.2 Gen 2 Type-A ports, two USB 3.2 Gen 2 Type-C ports (supports DisplayPort 1.4), and two USB 2.0 ports. There is also a COM (RS-232) port and a 3.5mm headphone/microphone combo jack.
On the rear, these systems serve up HDMI 2.0a and DisplayPort 1.2a outputs (one each), 1x Gigabit and 1x 2.5-Gigabit LAN ports, and two USB 2.0 ports, as pictured above.
Pricing and availability have not been announced.