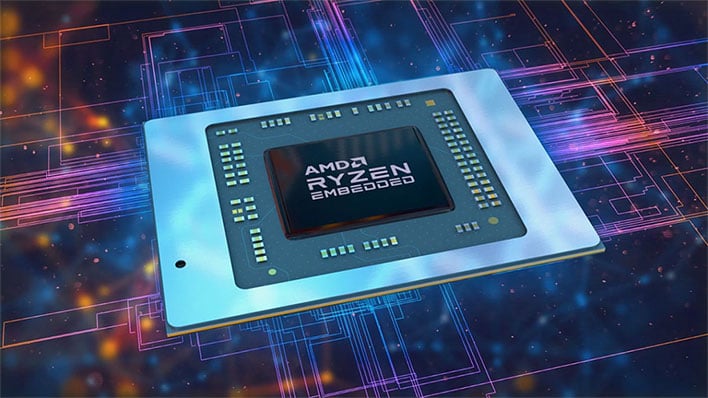 AMD has rolled out a new generation of Ryzen Embedded processors, its V2000 series, which are based on the company's 7-nanometer Zen 2 CPU architecture. Yes, Zen 2 was recently usurped in the architectural hierarchy by Zen 3 on the desktop and soon in the server sector as well, but it is not unusual for the embedded category to be a step behind other higher-powered categories.
Even so, the jump to Zen 2 is a beneficial one for embedded applications. AMD is offering its V2000 series with up to eight cores and seven GPU compute units, which the company says delivers twice the multi-threaded performance per watt. These chips also improve single-threaded CPU performance by up to 30 percent, and deliver up to 40 percent better graphics performance, compared to the previous generation.
"AMD is continuing to deliver high performance embedded processors for our customers with the new Ryzen Embedded V2000 series," said Rajneesh Gaur, corporate vice president and general manager, Embedded Business, AMD. "Pairing the ‘Zen 2’ CPU cores with Radeon graphics, we’re now providing our customers with a new class of performance and power efficiency with 7nm technology that enables them to implement unique designs that target their applications."
"We continue the 10-year planned availability as with our other Ryzen Embedded processors and look forward to seeing partners and customers utilizing fast processing speeds, integrated graphics and outstanding power efficiency of the Ryzen Embedded V2000 processor for years to come," Gaur continued.
Embedded processors are built for things like mini PCs, thin clients, edge computing systems, and other space saving designs. The V2000 series is capable of driving up to four independent 4K resolution displays. These chips also support enhanced I/O features, including up to 20 lanes of PCIe Gen3 (one x8, three x4) with nine root ports, four USB 3.1 Gen 2 (10Gbps) / two Type-C, four USB 2.0, SATA / SATA Express / 2x4 NVMe, LPC, and more.
Here is the lineup in a nutshell...

There are two 6-core/12-thread and two 8-core/16-thread models. The brawniest of the bunch is the V2748 with 8 cores and 16 threads clocked at 2.9GHz to 4.25GHz, along with 8MB of L3 cache and 4MB of L2 cache. It also boats 7 Radeon CUs clocked at 1.6GHz.
Similar to the V1000 and R1000 series, the new V2000 chips support AMD's Memory Guard technology, which is essentially a suite of security features such as Secure Boot and Secure Memory Encryption.
"AMD Ryzen Embedded V2000 SoCs leverage an onboard AMD Secure Processor that encrypts data before it feeds to the I/O, complemented with Platform Secure Boot capabilities to help ensure systems are booted from trusted software, with one-time programmable (OTP) capabilities enabling system designers to manage their own keys," AMD explains.
AMD has been a roll lately, having launched its Ryzen 5000 series to the desktop and getting ready to launch its Radeon RX 6000 series to retail next week. These new embedded SoCs add to the pile as AMD targets virtually every conceivable market.