Last year around this time, Arm announced its next-gen, custom Cortex-X1 core, which was its most potent CPU architecture to date. The Cortex-X1 "prime" core is found inside modern flagship SoCs like Qualcomm's Snapdragon 888 and Samsung's Exynos 2100. Today, however, Arm is announcing the successor to the Cortex-X1, unsurprisingly called the Cortex-X2.

Cortex-X2: Leading The Performance Charge For The New Armv9 Architecture

The Cortex-X2 is based on the new Armv9 architecture, and Arm claims that it will deliver up to a 30 percent uplift in performance over the Cortex-X1 found in devices like the Samsung Galaxy S21 Ultra. There's also a claimed 2x uplift in machine learning (ML) performance, which is becoming even more critical as tasks carried out on modern mobile devices become even more automated. 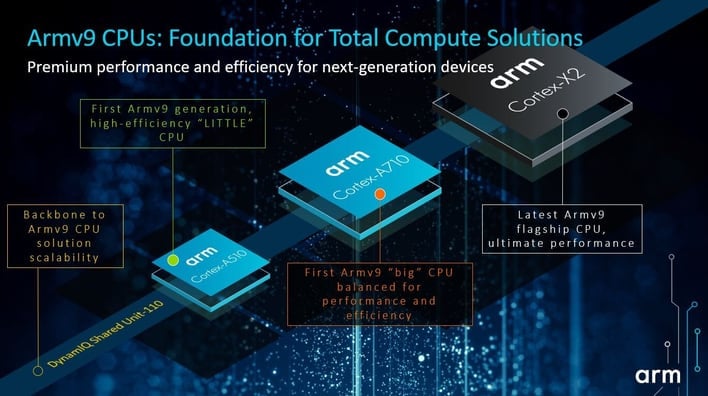 The Cortex-X2 exclusively supports Arm's AArch64 64-bit architecture, and its pipeline has reduced from 11 cycles to 10 cycles, while the number of dispatch states have dropped from 2 cycles to 1 cycle. With Cortex-X2, the reorder buffer (ROB) has increased by 30 percent from 224 entries to 288 entries. 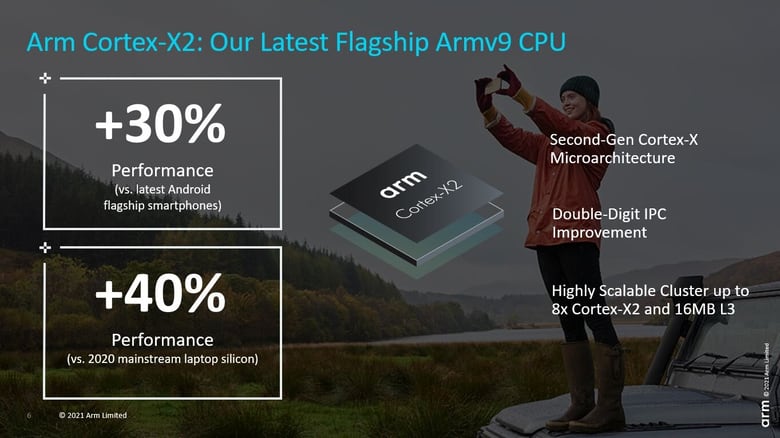 For efficiency reasons, the Snapdragon 888 (and its ilk) only uses a single Cortex-X1 as its prime core. However, Arm envisions that up to eight Cortex-X2 cores will be used in Windows 10 on Arm laptops and Chromebooks. These cores will then be linked using an enhanced DynamIQ Shared Unit (DSU-110) fabric. In this (8) Cortex-X2 configuration, Arm says that up to 16MB of L3 cache and 32MB of [unified] System-Level Cache will be supported.

While Cortex-X2 sits at the top of the stack, one rung down is the new Cortex-A710 core. Cortex-A710 is the Armv9 follow-on to last year's Cortex-A78, and is the "big" core in Arm's new big.LITTLE configurations. Compared to Cortex-A78, Arm is projecting a 10 percent improvement in instructions per clock (IPC) along with a 30 percent reduction in power consumption. Like the Cortex-X2, the Cortex-A710 also doubles the ML performance of its predecessor. 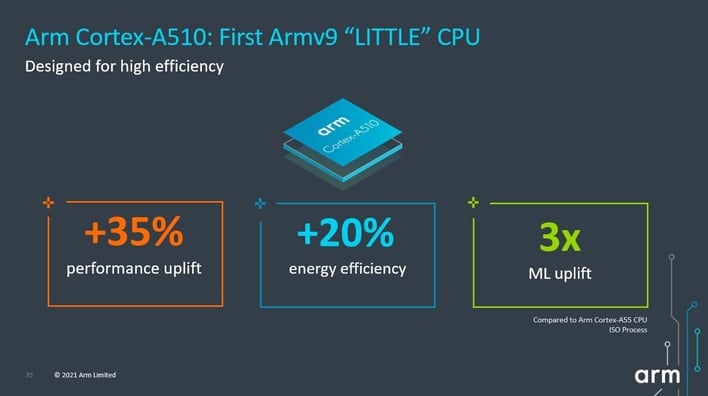 Compared to Cortex-A55, we're looking at a 35 percent boost in overall performance, along with a 3x improvement in AI and ML performance with the Cortex-A510.

Putting it all together, let's use the Snapdragon 888 as a guide. It has the following configuration:

The Snapdragon 888 successor, whatever it ends up being called, will then likely adopt this configuration:

SoCs aimed at the Windows 10 on Arm markets -- i.e., the successor to the Snapdragon 8cx Gen 2 -- would likely use a greater number of Cortex-X2 cores for improved performance given more generous thermals in the laptop form-factor.

We can't have new CPU cores without advancing performance and throughput on the GPU side, which brings us to Arm's new Mali GPU family. At the high-end, we have the new Mali-G710, which pairs a 20 percent boost in overall graphics performance, along with a 20 percent reduction in power consumption. Arm also quotes a 35 percent improvement in ML performance compared to the previous generation Mali-G78.

The Mali-G710 is configurable from as few as 7 cores to as many as 16 cores. While Mali-G78 scaled up to 24 cores, Arm notes that the bigger cores of Mali-G710 offer better performance-per-watt.

"By addressing these three pillars together, Arm can deliver uncompromised performance, security, scalability, and efficiency, accessible to millions of developers worldwide," said Arm. "These flexible solutions will empower our partners to unlock a new generation of immersive and interactive experiences across the broadest range of applications."

The first chips employing this new Arm core architecture IP portfolio are planned to ship during the first half of 2022.