Apple's M1-based (Apple Silicon) Mac mini, MacBook Pro, and MacBook Air spelled the end of Boot Camp, the company's solution for booting into Windows natively on its Intel-based hardware. At the same time, the big names in commercial virtualization options, VMWare and Parallels, are still scrambling to get an Arm64-native version of their apps out the door. However, one very innovative developer worked up a new feature to use QEMU to boot the Hyper-V image of Windows 10's Insider Preview build straight from Microsoft. Now that those changes have made their way into the wild, we can see just how Apple's new hardware handles while running Windows 10.

We got our mitts on an M1-based Mac mini, and a full review comparing it to the previous generation of the system, and much more, is coming soon. However, we also wanted to give HotHardware readers an early taste of what Apple Silicon can do against the other Arm64 platform: Qualcomm's Snapdragon 8cx running Windows 10, as well as Intel's Tiger Lake platform, of course running natively. We know this isn't entirely a fair fight—the Mac mini is a small form factor desktop with a more robust cooling solution, while the Samsung Galaxy Book S we have here is a thin and light fanless laptop. We also have Dell's XPS 13 2-in-1 here for comparison and it employs a tradition actively-cooled laptop thermal solution, again powered by Intel's 11th Gen Tiger Lake platform. Unfortunately, we don't have a MacBook Air handy, so these comparisons will have to do, for now.

Setting Up Windows 10 On An Apple Silicon Mac

Setting up QEMU to boot Windows 10 is pretty simple. First, we had to join the Microsoft Windows Insider program to get access to the Hyper-V image that Microsoft provides for setting up Arm64 VMs. Normally this would run on another Arm64 Windows PC as a virtual machine, but QEMU supports its .vhdx format natively. We asked the patch's author, Alexander Graf, if he was using the Insider Program build, and Graf confirmed to us that this image is all that's required. Indeed when we started QEMU with that image, we got the Windows setup screen straight away.

To get QEMU set up without using the command line, we used ACVM, an open source utility. ACVM let us set the number of cores available to the virtualized guest and choose how much RAM to give it. Because our Mac mini only has 8 GB of memory, we stuck to the defaults of four cores and 4 GB of memory for the guest. Because we wanted network access, there was a little bit more to go through to install RedHat's virtual network adapter, but all of that was pretty simple, and is meticulously detailed on ACVM's GitHub page. 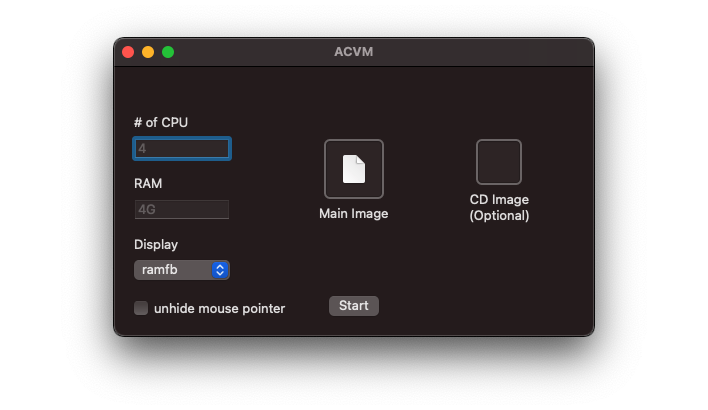 Once we got Windows 10 booted and accessing the internet, we downloaded a couple of relatively quick benchmarks that come from our previous Arm64 reviews: Geekbench and the Arm-native version of Edge so we could run some web-based benchmarks. Windows on the M1 Mac Mini has a couple of disadvantages beyond the amount of RAM available. First of all, there is no video or sound driver, so we were stuck with a maximum resolution of 1024 x 768. The network drivers apparently don't totally register with Windows, as every app we ran triggered a warning from Microsoft's SmartScreen service saying the internet wasn't available even though we'd just downloaded this installer. It's not perfect, but it works.

So after all that, how does the Apple Silicon Mac mini run Windows 10 in a virtualized environment? Apple made some bold performance claims, but now we can finally compare things a bit. We ran Geekbench, JetStream 2, and Browserbench 2.0. The charts below only compare the Galaxy Book S (which, again, is a notebook and potentially thermally constrained) to the Mac mini and the Dell XPS 13 2-in-1 9310 with Intel's Tiger Lake Core i7-1165G7. For the web tests, we Edge for all three systems, since it's Arm-native for both the Snapdragon 8cx and the M1. 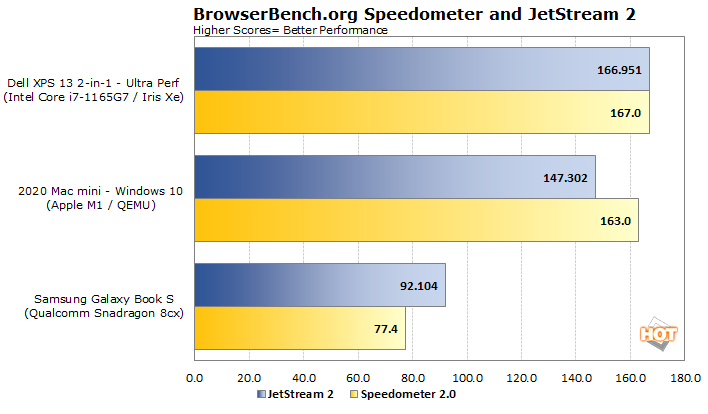 In a word, the Mac mini's virtualized performance was excellent. While we don't want to give away everything related to our forthcoming Mac mini review, the single-threaded performance of the Apple M1 is impressive, considering its power consumption figures. In GeekBench, it flat-out doubled up on the Snapdragon 8cx in the single-threaded test, and Apple Silicon outscored Qualcomm by 80%, despite not having its four low-power cores along for the ride. Meanwhile, the Tiger Lake Core i7-1165G7 in the Dell XPS 13 2-in-1 won both contests by relatively significant margins. When it comes to the multi-threaded GeekBench test, it's wise to remember that the Mac only dedicated four of its eight cores to the virtual machine and it's running Windows inside of macOS.

Meanwhile, we don't think these web test numbers tell the whole story. Again, the M1's performance is outstanding and, without giving anything away, its Speedometer and JetStream scores outclass even the previous-generation Mac mini with a Core i5-8500B. The Snapdragon 8cx loses out on Speedometer by more than 2:1 and the Apple system wins JetStream by more than 50%. However, the Mac mini doesn't have any video drivers in Windows 10. Using Windows to browsing the web is kind of a painful experience because scrolling isn't smooth and animations lag. That's not true in Safari or Chrome in its native macOS, but we don't think you'd really want to use Windows inside QEMU for web browsing on the M1 Mac mini.

If this whet your appetite, stay tuned. There's much more where this came from, and we'll have much more to say about the M1 Mac mini soon. As these quick tests illustrate, it's obvious that Apple has a strong custom silicon solution on its hands with the M1. The company is very confident in its new processor, and these benchmarks start to bear that out. We'll see if these claims hold try in a lot more workload scenarios, in our full review that's coming soon.