The iPhone 13 family isn't the only big news from Apple today; the company also announced the Apple Watch Series 7. The Apple Watch family has been around since Spring 2015 and has maintained the same overall design ever since. Sure, the displays have become a smidge larger, and the bezels have shrunk slightly over the years, but the same rounded design has remained.

That was all supposed to change with the Series 7, according to numerous reports. It was claimed that the flat-sided aesthetic that Apple introduced last year with the iPhone 12 and iPhone 12 Pro would transfer to the Series 7. Unfortunately, that was not the case, and what we have here today is another warmed-over refresh that looks very much like its predecessor.

The leaked reports did get the information regarding the larger display correct, however. So now we're looking at displays measuring 41 and 45mm instead of 40mm and 44mm, respectively. In addition, the bezels are slightly thinner, and the touch sensor now integrates with the OLED panel. This allows the panel to be thinner and provides a wraparound effect for contact displayed near the edge of the display. When all is said and done, there is 20 percent greater viewable screen real estate compared to Series 6. 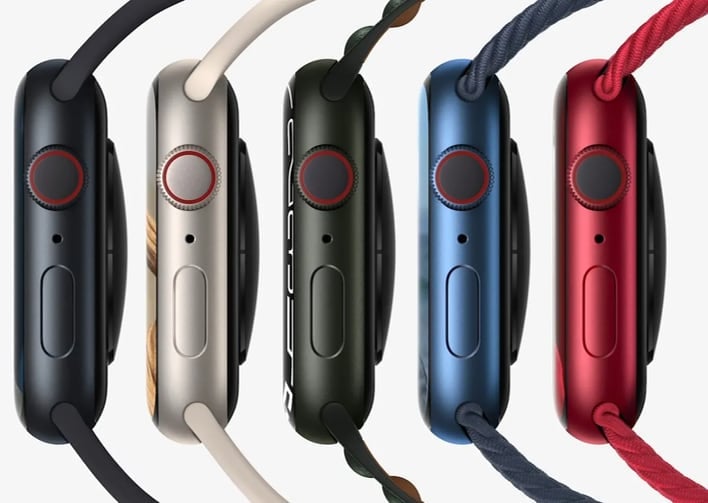 The casings on the new Series 7 watches are now more durable, and the display uses a crack-resistant crystal that is 50 percent stronger. Apple also boasts an IP6X rating for water and dust resistance.

Another "miss" pertains to battery life. The previous leaks alleged that Apple would include larger batteries to improve battery life. Instead, the Series 7 delivers up to 18 hours of battery life -- the same as its predecessors. If there's any consolation, it's that the included wireless charger now uses a USB-C connector instead of USB-A and charges up to 33 percent faster than before. As a result, the company says that an 8-minute charge should be sufficient to reclaim 8 hours of battery life.