One of the major selling points of Apple's new iPhone 12 models is support for 5G connectivity, which is offered on its entire lineup (iPhone 12 mini, iPhone 12, iPhone 12 Pro, and iPhone 12 Pro Max). But apparently it might come with a pretty big caveat for some people. A supposed internal sales document suggests 5G will not work if using dual SIM cards.
It is not uncommon for people to have multiple phone numbers, which allows them to keep their work and personal lines separate from each other, but still use the same handset. Using two SIM card in a single device is simply more convenient than lugging around two smartphones, for those who need to have distinct phone numbers for whatever reason.
The latest generation iPhone 12 series supports this, by way of an embedded SIM (eSIM) and a removable SIM card slot, rather than letting users install dual nano SIM cards. Fair enough, except for one potentially very big wrinkle. A user on Reddit posted an screenshot of a supposed document from Apple's internal sales resources websites that indicating that 5G only works when using a single line... 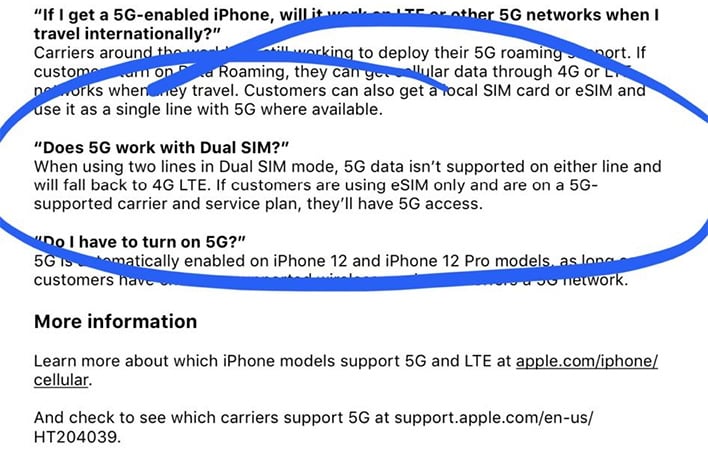 "Does 5G work with Dual SIM?
When using two lines in Dual SIM mode, 5G data isn't supported on either line and will fall back to 4G LTE. If customers are using eSIM only and are on a 5G-supported carrier and service plan, they'll have 5G access," the screenshot says.
The wording is confusing, because it seemingly suggests that 5G only works with the eSIM. However, not all wireless carries support eSIM, which is something Apple discloses, without ever saying that 5G is tied to the eSIM. So either the document is poorly written, or it is simply not real.
This is a bummer, assuming the limitation exists. However, the same user also says Apple is planning to push out a software update sometime this year that will enable 5G when using dual SIM mode, so it would only be a temporary restriction (and a very short term one at that).