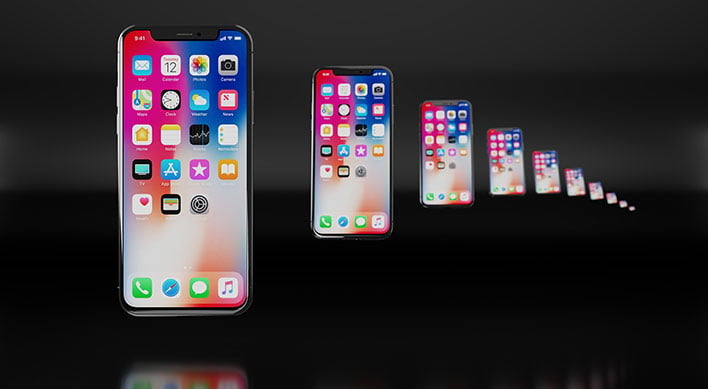 Apple's upcoming iPhone 12 Pro Max and iPhone 12 Pro might separate themselves from the regular iPhone 12 by incorporating a 3D time of flight (ToF) sensor into the mix. There will likely be other differences between the Pro models and regular model, but if a breakdown of Apple's iOS 14 code is any indication, the ToF sensor will be one of the major distinctions.
An increasingly number of flagship phones have been adopting 3D ToF cameras. They are not used for taking pictures in the traditional sense, but to map out a 3D space. Using a light signal, a ToF camera can provide more accurate depth mapping compared to an ordinary camera lens, with distance and volume measurements.
The folks at 9To5Mac say they viewed the underlying code in iOS 14 and found details related to new phones with the codename "d5X," which are believed to be Apple's 2020 iPhone models. For reference, the iPhone 11 series was identified as "d4x," so it's a logical conclusion.
Out of the three new models listed, only two of them were shown to have a ToF sensor. That suggests the iPhone 12 Pro Max and iPhone 12 Pro will be the ones to sport the fancy camera for 3D mapping. Going on pure speculation, we can also guess those models will have a wide-angle lens, an ultra-wide angle lens, and a telephoto lens as well.
Interestingly enough, it's said Apple is developing a new augmented reality application for iOS 14. Having a ToF sensor would be a boon for such a thing, allowing the supported handsets to generate more accurate 3D models than what Apple's TrueDepth camera is capable of producing.
Barring a disruption from the coronavirus, it's very likely Apple will announced its iPhone 12 series in September 2020.