Apple announced a series of product and service upgrades during its Peek Performance event today, including the latest generation iPad Air powered by the company's M1 processor, and a beefed up iPhone SE with an A15 Bionic chip and 5G radio underneath the hood. While neither are flagship models, both now wield high-end swagger in more affordable packages (relative to Apple's top offerings, that is).
Starting with the iPad Air, it gets the same slice of Apple M1 silicon as found in the iPad Pro and some of Apple's latest MacBooks. It's also same chip featured in the Mac mini we reviewed last year. Without rehashing the M1 details from top to bottom, highlights here include an 8-core processor comprised of four performance cores and four efficiency cores, an 8-core GPU, and a 16-core Neural Engine.
This is not an insignificant upgrade to the iPad Air, which should offer some decent performance chops for the money. Apple opted to skip over the A15 Bionic (the last generation iPad Air ran on an A14 Bionic) for its M1 silicon, and as such is touting a 60 percent performance uplift and twice the graphics muscle compared to the previous tablet. 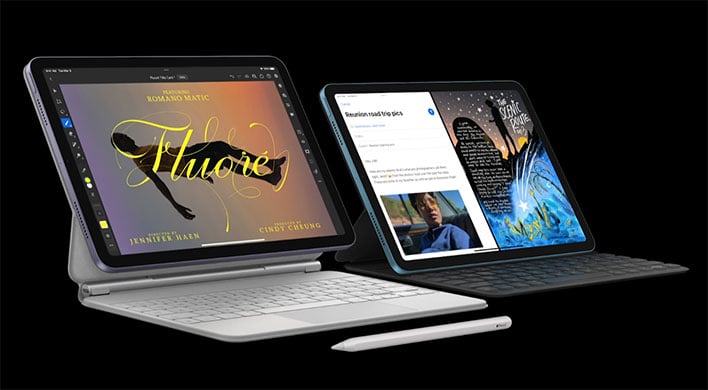 "From editing multiple streams of 4K video, to playing graphics-intensive games, redesigning a room in 3D, and more realistic augmented reality (AR), the performance of M1 enables users to do more than ever with iPad Air," Apple says.
The M1 chip powers a 10.9-inch Liquid Retina display with 500 nits of brightness. There's also an upgraded 12MP ultra-wide camera on the front (up from 7MP), a 12MP wide camera on the back, Wi-Fi 6 and optional 5G connectivity, and an upgraded USB-C port that's twice as fast as the last gen (10Gbps) for quicker file transfers. Apple Pencil support is included as well (though the stylus is a separate purchase).
Pricing is unchanged this round, with the iPad Air starting at $599 for Wi-Fi and $749 for cellular, both with 64GB of onboard storage (a 256GB option is also available). You can preorder the iPad Air this Friday, and it will be available on March 18. 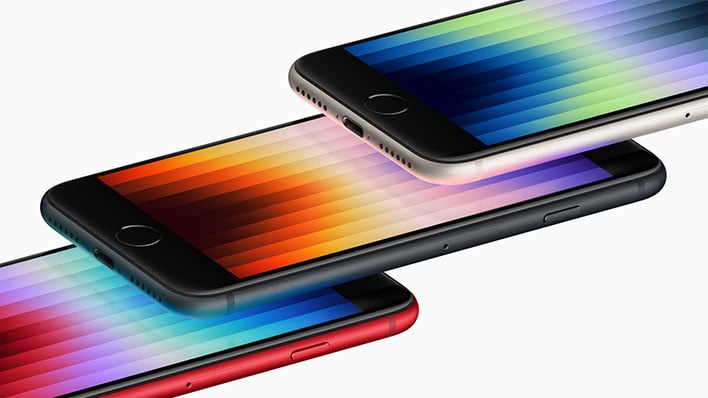 The iPhone SE is the cheapest variant of the iPhone, and the latest version for 2022 gets a bump to Apple's A15 Bionic. It also gets a 5G radio for faster cellular connectivity where 5G is supported, albeit sub-6GHz (no mmWave here).
"Built for efficiency, A15 Bionic works in conjunction with the latest-generation battery chemistry and tight integration with iOS 15 to enable better battery life on iPhone SE. Even with its compact form factor and new technologies like 5G, iPhone SE has longer battery life than the previous-generation and older 4.7-inch iPhone models. iPhone SE is compatible with Qi-certified chargers for wireless charging, and also supports fast charging," Apple says.

Apple kept the form factor the same, meaning this is still a comparatively compact handset with a 4.7-inch screen. It also retains the Touch ID button from earlier era iPhones, for those who prefer it. The phone is constructed form aluminum and what Apple claims is the "toughest glass in a smartphone on the front and back," same as found on the back of the iPhone 13 Pro. And as it applies to durability, it touts an IP67 certification for water and dust resistance.
There's a new camera system on the latest-gen iPhone SE, though it still rocks solo in the back with a single camera, a 12MP sensor with an f/1.8 aperture. For selfies, Apple stuck with a 7MP front-facing camera.
The iPhone SE will be available in 64GB, 128GB, and 256GB variants starting at $429. Like the upgraded iPad Air, preorders will open on Friday, followed by a retail release on March 18.