As expected, Apple has announced the latest update to its entry-level 13-inch MacBook Pro, and it's pretty much a mixed bag if you been hanging on to every leaked spec that has been churned out by the rumormill. However, it's still a pretty solid upgrade for those that are firmly within the Apple camp.

The biggest change, however, is the move to Apple's Magic Keyboard, which uses butterfly-style switches instead of the hated and failure-prone scissor switches that the company first introduced back in 2015. This update means that all of Apple’s MacBooks -- starting with last year’s 16-inch MacBook Pro, and then proceeding to the refreshed MacBook Air -- now have the new Magic Keyboard design. All versions of the 13-inch MacBook Pro also now feature the Touch Bar along with a physical escape key.

One of the big changes rumored to be coming with this MacBook Pro refresh that didn't materialize is a larger display. It was widely expected that the MacBook Pro's display would increase in size from 13 inches to 14 inches, similar to how its larger sibling went from 15 inches to 16 inches last year.  Instead, we get the same 13-inch display with a resolution of 2560x1600 and a 500 nits brightness rating. 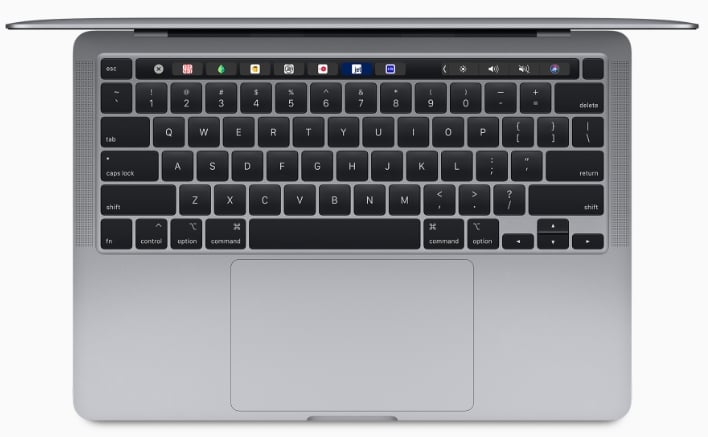 Standard storage has been doubled from a 128GB to 256GB SSD, while you can configure system with up to 4TB. 8GB of memory is standard, while opting for 16GB adds $100. However doubling memory again to 32GB is a $400 upgrade. Fully decked out with the Core i7 CPU upgrade, 32GB of RAM and 4TB SSD, the 13-inch MacBook Pro will cost you $3,599. Even at that price, you're still only getting Wi-Fi 5, instead of the now commonplace Wi-Fi 6.