Here Are Animal Crossing: New Horizons Event Days And Updates Planned For May And June

Our real-life calendars may be a little bare right now, but the calendar in Animal Crossing: New Horizons is filling right up. The charming game features a wide variety of seasonal events that include new items, characters, and opportunities to earn Nook Miles. Here is everything you need to know about the spring Animal Crossing: New Horizons events.

Beautify Your Island During Nature Day

The first event is “Nature Day” and it lasts from April 23rd to May 1st. The event is unsurprisingly based off of Earth Day, which is typically celebrated on April 22nd. Players will be able to earn Nook Miles by completing a variety of themed tasks, including planting trees and making crafts out of plants. Players will also be able to interact with a new merchant named Leif. Leif sells various seasonal plants and will purchase weeds at double their usual price. Unfortunately, Leif does not visit everyday, so players will want to take advantage of his appearances.

The update that introduced Nature Day also includes a few other tweaks. This particular update has lowered interest rates and snuck in another merchant. “Redd” is an art dealer who sells sculptures and paintings, but some of his pieces are forgeries. Players will need to figure out which works are real, negotiate for a reasonable price, and donate them to the museum. You can check out our guide for the Animal Crossing: New Horizons April update here.

Meet Old Friends During May Day

The second spring event is May Day, which will occur between May 1st and May 7th. Nintendo has not revealed too much about the event, but they have noted that players will be able to purchase a one-time ticket to a special May Day Island. The Island will include a maze made of hedges. It seems likely that players will be tasked with collecting items and meeting up with a “special visitor”. A teaser video has hinted that the “special visitor” will be fan-favorite character Rover. Rover has played a variety of roles in previous Animal Crossing games and it is unclear what his new position will be in New Horizons. 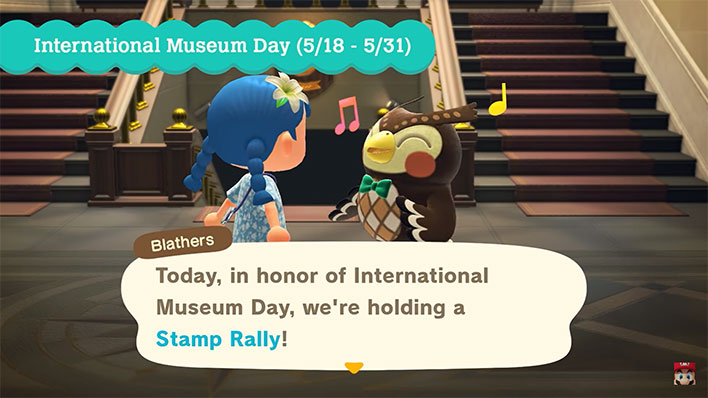 Image from Nintendo
Players will shortly afterwards get to celebrate International Museum Day. The event will last from May 18th to May 31st. Players will need to visit Blathers during the event to participate in a “Stamp Rally”. Players will then be tasked with finding stamp machines throughout the museum to receive some kind of reward. There are very few details about the event, but some believe that the stamps will be related to previous donations. Regardless, it does not hurt to donate items to your museum.

Plan a Photoshoot During Wedding Season

Last but not least, the entire month of June will be dedicated to weddings. Players will be able to visit couple Reese and Cyrus on Harvey Island. Players will need to help the couple set up a photo studio so that they can take anniversary photos. The player will then be rewarded with “wedding-themed” items. This would not be the first time the game has facilitated romance. Some couples have turned to the game to enjoy real “dates”.

It is also important to keep in mind that many bugs and fish are seasonal too. Several species recently became available in the game. You can check out our April bug and fish guide here.