There have been some reliable leaks suggesting Google intends on launching at least one and perhaps even two folding smartphones in the not-too-distant future. We'll have to wait and see, but as we do, an early build of Android 12.1 adds credibility to the leaked info, as it contains a handful of enhancements designed for folding form factors.
That doesn't necessarily mean a folding Pixel device is for sure in the works. There are other folding phones that run on Android—see our Samsung Galaxy Z Fold 3 review, and while you're at it, check out our review of the Galaxy Z Flip 3 as well, to name just two examples (both from Samsung). The form factor has stuck around so far, and so we'll see what becomes of it.
As to Android 12.1, the folks at XDA Developers say they have been provided an early build from an unnamed source, and has now spent some hands-on time with it. As they note, it was previously hinted that an Android 12.1 release would wedge in between Android 12 and Android 13 due to code changes submitted to the Android Open Source Project (AOSP).
If that comes to pass, this would be the first point release since Android 8.1 Oreo, back in 2017. And the reason it might make sense now is because of the increased focus on folding form handsets. So, what does Android 12.1 introduce? 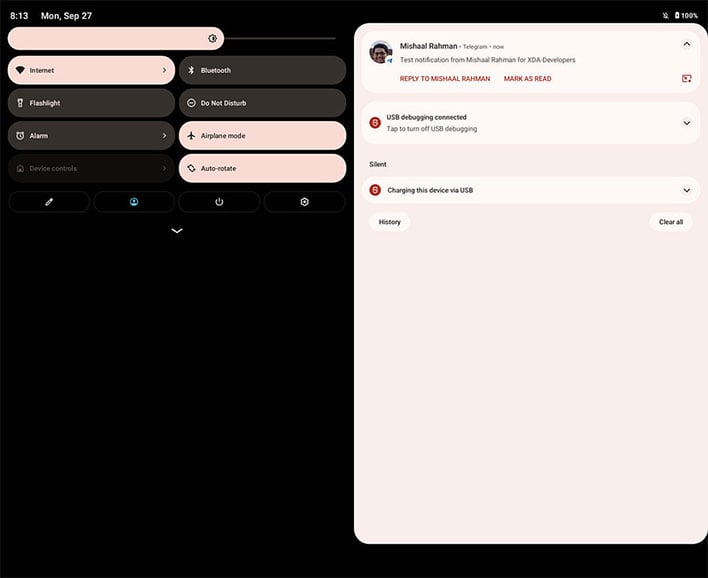 For one, a dual-pane configuration for the launcher app and notifications panel. Users can also adjust the size of the lock screen. This allows the Quick Settings and the notifications panel to reside side-by-side, as shown in the screenshot above, to make better use of the screen real estate. The usefulness may depend on the actual size of the screen, but the functionality is there regardless.
On a related note, it's said that Android 12.1 will display three columns for the Quick Settings panel if the screen density is sufficient. It's not clear what exactly meets the requirement, but this is something that could be useful for bigger handsets that effectively transform into mini tablets.
The lock screen is also split in two, as shown up top. You can see in the image that the date and time are on the left side, while the right side houses the notifications. Meanwhile, the lock icon takes center stage in the middle.
There are bunch of other tweaks as well, some of which are geared towards folding screens, and others that are general updateds. Some of them include...
There will be some new wallapapers, boot animations, and themes that are headed to Android 12 and Android 12.1, with the theming system becoming open source in the point release. It should be an interesting release, whenever it arrives. In the meantime, check out the full notes from Android 12.1 hands-on preview.