Back in mid-April, AMD announced its Ryzen 5000G "Cezanne" APUs that are part of the company's Zen 3 family. However, unlike Zen 3 "Vermeer" desktop processors -- a la the Ryzen 9 5900X -- Ryzen 5000G APUs have integrated Radeon Vega graphics.

During the initial announcement, AMD clarified that the first round of Ryzen 5000G processors would only be available for OEMs until later this year. Now, AMD is giving us a timetable for when the first retail chips will land for enthusiasts. Unfortunately, it's still going to be a bit of a wait for both the two consumer-oriented chips: the Ryzen 7 5700G and the Ryzen 5 5600G. According to AMD, both will launch on August 5th, priced at $359 and $259, respectively. 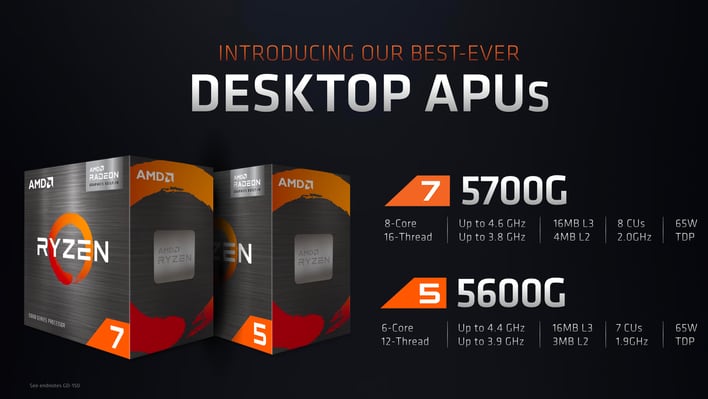 The Ryzen 5 5600G sits further down on the performance ladder with a 6-core/-12-thread design backed by 3.9GHz base and 4.4GHz boost clocks. While the 65-watt Ryzen 5 5600G also features 16MB of L3 cache, its L2 cache is trimmed back slightly to 3MB. The Radeon Vega GPU also gets a downgrade to 7 CUs operating at 1.9GHz. Fortunately, it appears that Zen 3 will be the last generation to stick around with Radeon Vega, as it's rumored that Zen 4 APUs will adopt RDNA 2 GPU architecture. 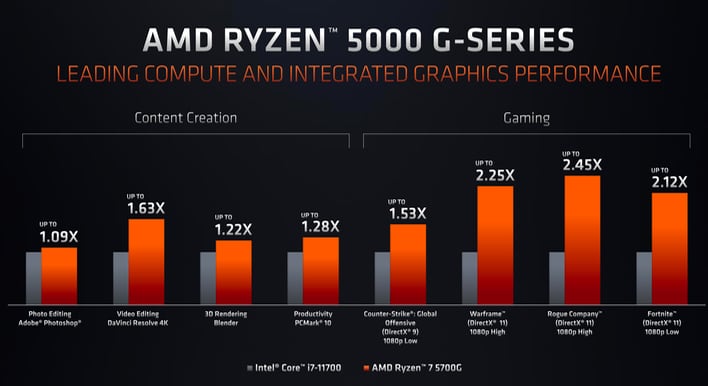 When it comes to performance, we must take AMD's handpicked numbers with a grain of salt. Still, the company is promising that the Ryzen 7 5700G offers up to a 1.63x uplift in performance over the Intel Core i7-11700 Rocket Lake-S processor in productivity tasks (DaVinci Resolve 4K) and up to a 2.45x improvement in gaming (Rogue Company). AMD didn't offer up performance numbers for the Ryzen 5 5600G.

At this time, it is unknown if the entry-level member of the Ryzen 5000G family, the Ryzen 3 5300G, will also make an appearance on the retail market during the back half of 2021.