AMD had quite a bit to say about its updated 3rd Gen EPYC processors with 3D V-cache and new Instinct MI200 GPU accelerators, which deliver massive firepower to enable exascale computing in the HPC sector. But those weren't the only nuggets Dr. Lisa Su and the gang dropped during yesterday's event. Towards the end of the presentation, Dr. Su provided an update on AMD's next-gen EPYC chips based on Zen 4, and it sounds like they're going to be beasts.
There's actually two EPYC stacks being built atop Zen 4. The first is Genoa, which will be manufactured by TSMC on an optimized 5-nanometer node. AMD intends to offer Genoa with up to 96 cores and 192 threads, though the high core and thread counts are only part of the story. Dr. Su says Genoa's 5nm process will introduce twice the density, twice the power efficiency, and at least 1.25 times the performance of current 7nm designs.
"When introduced, we expect Genoa will be the world's highest performance processor for general purpose computing," Dr. Su said in no uncertain terms. "It's designed to excel across a broad range of data center workloads, from enterprise to HPC to the public cloud." 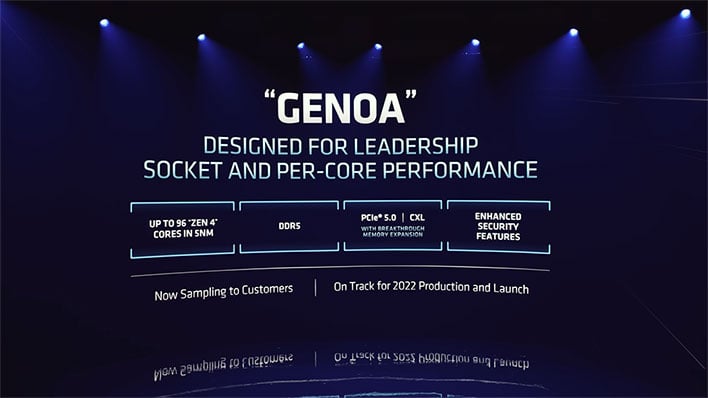 Dr. Su also says Genoa will extend AMD's lead at the socket level and per-core performance level. It will introduce support for DDR5 memory and PCI Express 5.0, as well as support for the new CXL interface. AMD is promising "breaking memory expansion capabilities for data center applications," which could be a boon for certain workloads.
Genoa remains on track to launch next year, and is actually already sampling to customers. 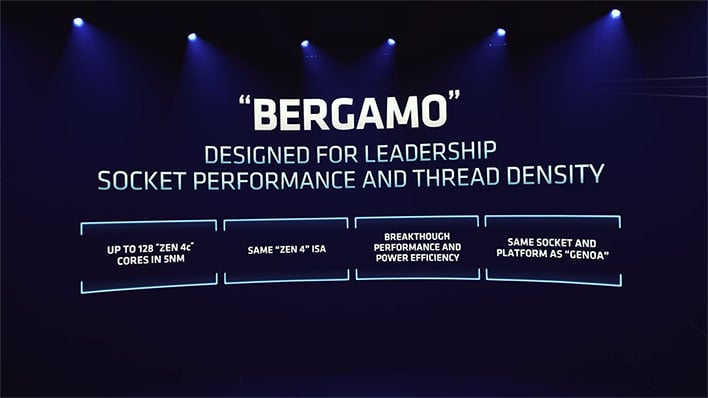 AMD's also plotting a next-gen EPYC processor built on TSMC's 5nm processor that is optimized specifically for cloud platforms. Codenamed Bergamo, the company is calling the underlying architecture Zen 4c. Dr. Su notes that cloud applications are very throughput oriented and can take advantage of a high number of threads, and that's where Bergamo will flex its big iron muscle.
Bergamo processors will top at at whopping 128 cores and 256 threads. While these chips are based on a "new version of Zen 4," they remain fully software compatible and utilize the same socket platform as Genoa, as well as support for the same technologies (DDR5, PCIe 5.0). What Zen 4c offers, however, is a set of cloud enhancements, including a density-optimized cache hierarchy and better power efficiency for cloud-native workloads.
Barring any delays, AMD expects to ship Bergamo in the first half of 2023.