Bergamo is a city in Italy, located northeast of Milan. It might also be the codename for an upcoming 128-core/256-thread EPYC server processor based on AMD's Zen 4 architecture, if the latest rumor is to be believed. If true, the chip would represent a spirited attempt by AMD to claim more data center market share from rival Intel.
Does it actually exist, though? Well, not right at this moment. It might be on AMD's internal roadmap, though, destined to arrive sometime after Genoa (also Zen 4) and before Turan (Zen 5). Or perhaps it was planned or discussed at some point, but then AMD later decided to shelve those plans, at least for the time being.
That's the problem with leaks and rumors—sifting through what is real and what is fake is no easy task sometimes, especially when you consider that plans can change over time. In this case, information is all over the place.
The first mention of a 128-core EPYC processor came from AdoredTV, who claimed to have heard from a source that it would be part of the Genoa stack. However, other leaks and rumors suggest Genoa will top out at 96 cores and 192 threads.
This is precisely what Moore's Law Is Dead claims in a newly published video. He is not 100 percent confident in the latest leaked info, but after speaking with multiple sources, he suggests Genoa will indeed max out at a 96-core/192-thread configuration, and that a 128-core/256-thread EPYC processor codenamed Bergamo will come sometime later. 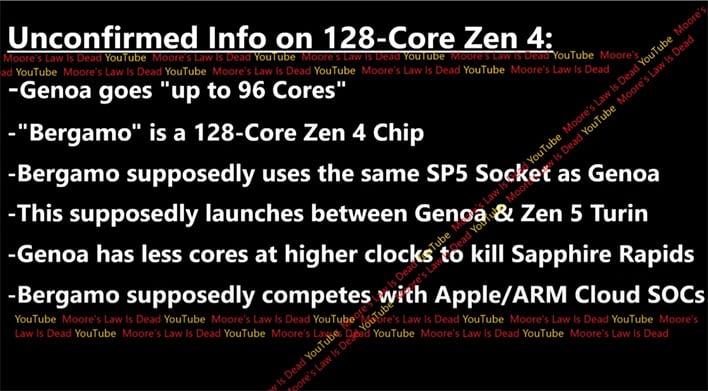 One of the sources he spoke with said it has been some time since he was privy to AMD's plans for EPYC, but is aware of the company having previously planned both 96-core and 128-core models a while back. When prodded by Moore's Law Is Dead, who said he had been hearing the Bergamo part would be a densely packed and lower clocked chip, the source said such a product was indeed discussed at AMD at some point.
If Bergamo is real, it is likely the lineup that will go toe-to-toe with the version of Intel's Sapphire Rapids Xeon processors that have on-die HBM, as well as Arm-based server hardware from Apple and Google. It's said Bergamo will feature the same SP5 socket as Genoa, but different underneath the hood with 16 Zen 4 CCDs to arrive at 128 cores.
We obviously can't say if Bergamo is real (AMD has not announced nothing of the sort), but if it was at least discussed at some point, the decision to launch or not launch a 128-core EPYC processor based on Zen 4 may depend on how much market share AMD can pluck from Intel with Milan and then Genoa. The data center is a lucrative market segment, and while Intel claims the lion's share of it, AMD has been making some headway. It's not hard to imagine a 128-core Zen 4 chip sending even more server dollars towards AMD.