Ever since AMD launched its Ryzen family of processors in 2017, the company has been on an upward trend in CPU market share versus Intel and regarding its financial health. That winning streak continues today, as AMD just announced its Q2 2021 results, and they are nothing short of amazing for the company.

AMD booked revenue of $3.85 billion for the quarter, making it the fourth quarter in a row that the company broke a record for this metric. But, more importantly, this represented a sizable 12 percent gain of the prior quarter and a staggering 99 percent gain compared to the same quarter last year.

Gross margin ticked up by 4 percentage points year-over-year (2 percentage points quarter-over-quarter) to 48 percent. Non-GAAP net income ballooned by 260 percent to $778 million, while non-GAAP earnings per share came in at a solid $0.63 (up 250 percent YoY). There's a lot to be happy about if you're AMD right now, and President and CEO Dr. Lisa Su is rightly optimistic about the results. 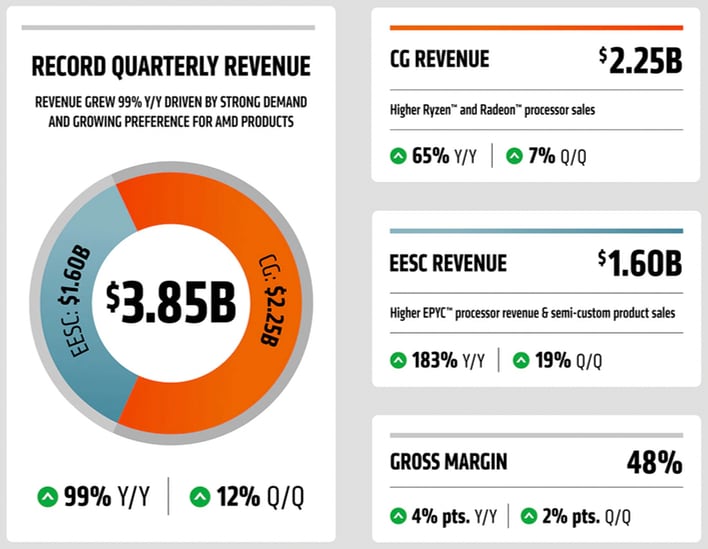 "Our business performed exceptionally well in the second quarter as revenue and operating margin doubled and profitability more than tripled year-over-year," said Dr. Su. "We are growing significantly faster than the market with strong demand across all of our businesses. We now expect our 2021 annual revenue to grow by 60% year-over-year driven by strong execution and increased customer preference for our leadership products."

Looking to the third quarter, AMD forecasts revenue of $4.1 billion, which would represent a 46 percent increase YoY. According to AMD, the revenue bump should be attributable to all business sectors, which have been firing on all cylinders this year. For example, AMD's Ryzen consumer, Ryzen Threadripper workstation, and EPYC server processors have continually gained market share, while sales of Radeon RX 6000 GPUs have also been strong. And we can't forget that the company's semi-custom business is booming thanks to robust PlayStation 5 and Xbox Series X/S demand.

The next products in the pipeline for AMD to launch will be the Radeon RX 6600 and RX 6600 XT. The latest reports suggest that the two Navi 23 cards could launch on August 11th.