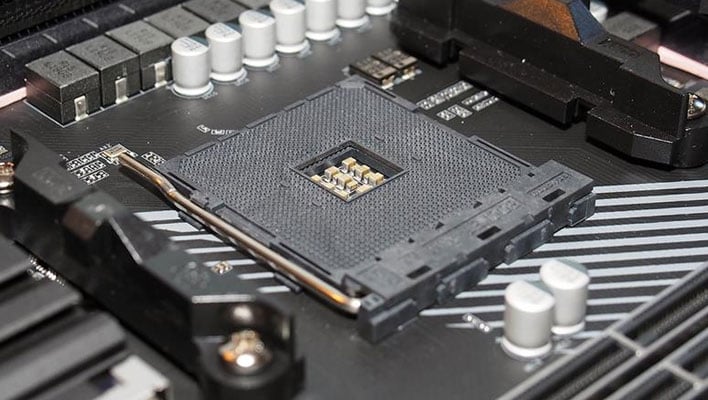 Sometime later this year, AMD will unveil its Zen 3 CPU architecture with a new Ryzen 4000 series of desktop CPUs (not to be confused with AMD's Ryzen 4000 series of mobile chips based on Zen 2). The question is, will these next-gen parts still leverage the AM4 socket? It certainly seems that way, based on everything that's been said up to this point.
The latest bit of evidence comes from Scenker XMG, a PC maker based in Germany that recently launched its Apex 15 laptop, a bodacious desktop replacement system configurable with up to a Ryzen 9 3950X with 16 cores and 32 threads. The motherboard inside the Apex 15 is based on AMD's B450 chipset, which has been "confirmed to be able to support future AMD Ryzen 4000 desktop CPUs."
XMG made the statement in an announcement posted to Reddit a couple of weeks ago, and was spotted by the eagle-eyed folks at Hexus. But wasn't this known all along? Well, sort of, but a lot can happen in three years.
Going back to 2017, AMD's James Prior suggested in an interview with OverclockersUK that the AM4 socket would be relevant through 2020. However, he was answering a question about whether or not AMD's Zen 2 CPUs would work in socket AM4 motherboards.
"Um, that is an interesting question. We have not announced anything publicly about our Ryzen 2 in desktop yet. What I would say is, what we have already public said is that AM4 is supposed to be around for a long time. We want to support it up until 2020... we want to support AM4 through 2020 using the existing infrastructure," Prior said at the time.
As we now know, Zen 2 CPUs do in fact leverage AM4. Looking ahead to Zen 3, our assumption is that those will as well, though technically, AMD could roll with a different socket and still have kept its word—Zen 2 will remain a relevant architecture through 2020.
That said, bear in mind that Zen 3 is not a major redesign. It's based on an enhanced version of TSMC's 7nm manufacturing process, and should bring faster clocks and better power efficiency to the table. Likewise, the expectation is that they will work in most socket AM4 motherboards, with a BIOS update.
It's not clear how far back support will go, though according to XMG, the B450 chipset is a go. We'll find out for sure later this year when Zen 3 arrives (an announcement is rumored for September, following a delay due to the COVID-19 situation).