AMD is the process of assembling a star-studded cast of Zen 3 CPUs, starting with its initial batch of Ryzen 5000 series for the desktop. Give it some time and Zen 3 will spill over to other product lines. One of those will be AMD's EYPC lineup for servers, and ahead of an official launch, an EPYC 7763 has been spotted flexing 64 cores and 128 threads.
This follows a recent cameo of another next-gen EPYC processor, the EPYC 7713, which made a benchmark cameo in SiSoftware's SANDRA database. Codenamed "Milan," the new generation of EPYC processors will bring the benefits of Zen 3 to servers and data centers, where they will fight it out with Intel's Xeon lineup.
Over at Chiphell, forum user diogin posted a low quality photograph of what is purported to be an EPYC 7736 CPU, with part of the identifying markings covered up by a screwdriver. You'll notice it says "2019" in the lower-left corner, which one of the forum members says is a designation of when the part was designed.
"He didn’t cover the 2 which means it was produced in 2020. There is a D below, which means this is a[n engineering] sample," another user wrote. 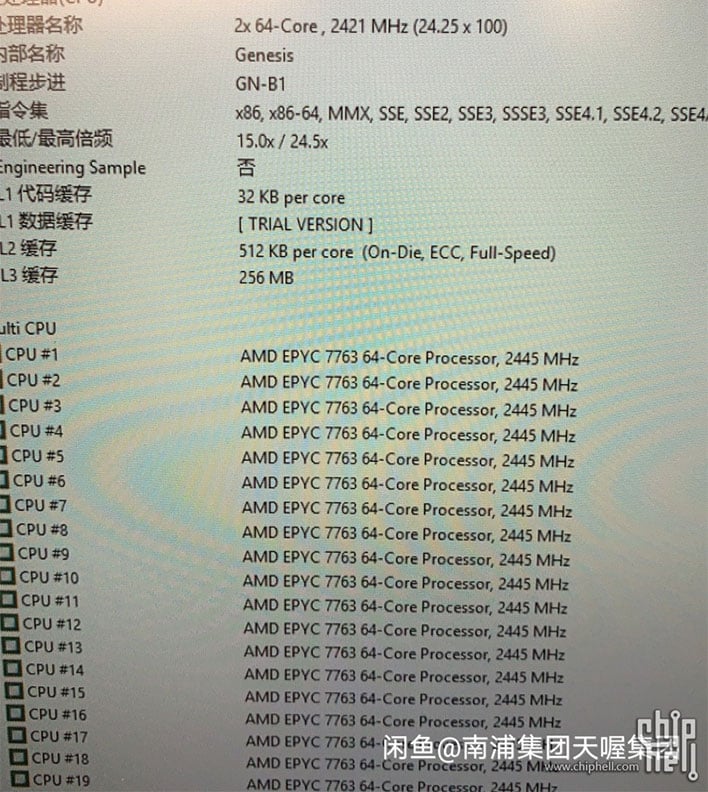 According to a couple of screenshots that were also posted (like the one above), the chip flexes 64 physical CPU core and 128 threads, same as what SANDRA indicated for the EPYC 7713. The screenshots also show it has having around a 2.45GHz base clock and 3.53GHz boost clock, along with 256MB of L3 cache and 32MB of L2 cache.
There are actually two of these CPUs running in the test setup, which equates to 128 cores and 256 threads of computing muscle working in tandem. Some of those specifications could change in the final silicon, though, as bear in mind that these are early samples. Faster clockspeeds are certainly a possibility, and maybe even a strong one.
It will be interesting to see how AMD's updated EPYC lineup ends up performing. Zen 3 is a stronger architecture compared to Zen 2, with AMD touting a 19 percent bump in instructions per clock. And in our own testing, the Ryzen 5000 series is beastly.
No release date for Milan has been announced, but we expect them to arrive before the end of 2020.